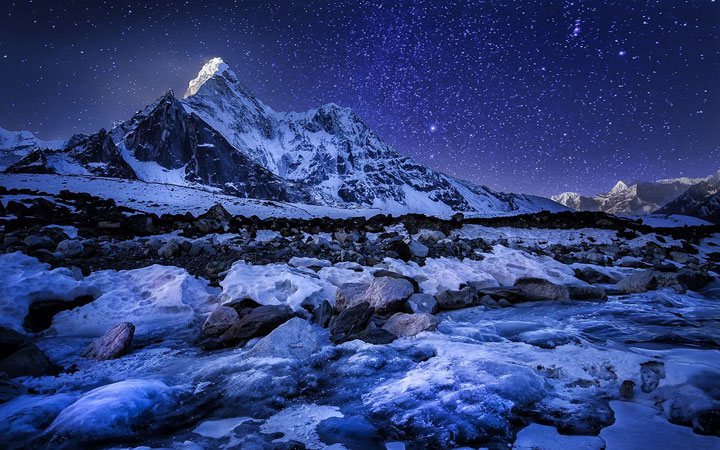 An avalanche is a sudden, drastic flow of snow pouring down a mountain side. The avalanche can occur just by natural triggers, for example, when fresh snow setting on old snow. It can also occur by artificial triggers, such as climbers on the mountain. When avalanche has started, a climber usually has no time to move to the safe place quickly. It rush down the mount in a very high speed that if a climber get caught in it, the climber maybe buried alive or push down for thousands feet. Now, only qualified mountain guides who have a good knowledge of the danger of avalanches on Mount Everest could spot a possible avalanche and avoid climbing on the danger area.

A crevasse can be deep, wide. The depth can compare with the length of a football pitch and the width can be the wide of a building, or the crevasse can be 10 feet deep and 5 feet wide. In a word, the size of the crevasses can be deadly. On Mount Everest, there are many crevasses opening up and closing, especially in the Khumbu Icefall. A crevasse can usually be found under a new snow bridge which made of snow in just in previous years. A crevasse is nearly can not be seen and it is lethal to the climbers. If a climber drops to the deep bottom of a crevasse, there is nearly no way to come out.

The Weather on Mount Everest

On Mount Everest, the weather is changeable and it is so changeable that if a climber gets caught out, he could be killed by the bad weather. So, the weather reports is very important and should be studied with great care. The weather report can give you the information about when is the good weather that you can climb up safely, and when the bad weather come that you had better stay down to wait for safe days.
The wind speed on Mount Everest can reach 100mph+, and the temperature on Everest ranges from 10 to -25 Celsius, and it may be colder with the chilly wind. The weather may be the most physical danger on Mount Everest that could make or break you dreams to reaching the top of Mount Everest. 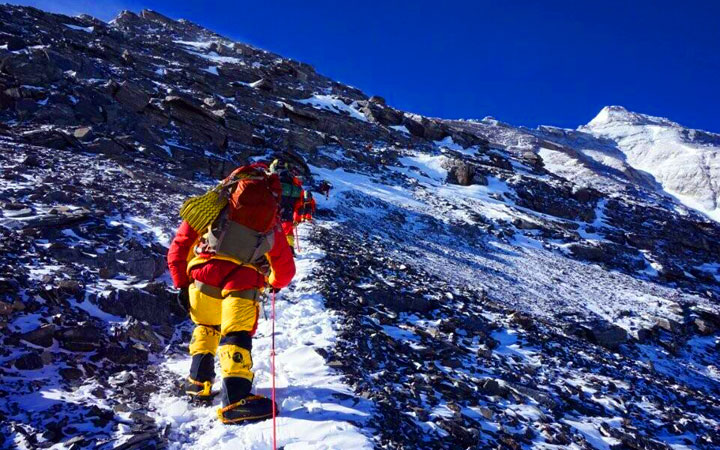 As the Mount Everest is so high, a falling rock or a solid ice piece as large as lump could seriously injury or even kill you. The climbers above you could be just at the time of climbing with their feet to get a grip and kicking in the ice which may loosen some rocks or ice falling down quickly to hit you.

You may not believe that other climbers also a danger, but when climbing the mountain, the biggest problem could be over crowding. Imagining a climber above you slips or falls, there is a possibility that the climber falls to you and takes you down together. Especially on Mount Everest, climbers are tired and they may become slow, clumsy, losing equilibrium, disoriented and easy to neglect simple mistakes which could drag other climbers or may be disastrous for others.

Many expeditions use oxygen supplemental devices when they are climbing the mount everet especiall when it is up to 8000m. Everest can be climbed without supplementary oxygen, but only by the most accomplished mountaineers and at increased risk. If any climber lacks of oxygen, it could lead to oxygen deprivation and one cannot think clearly and even lead to brain cell damage if it is really bad. When one is climbing Mt. Everest, the combination of extreme weather, low temperatures and steep slopes often requires quick, accurate decisions. Oxygen deprivation leads to a slow mind which may cause fatal mistake during the climbing.
There are also other dangers such as slippery ice and subzero temperatures. If you want to climb to the top of Mount Everest one day, these dangers are something you must be aware of. We must believe that there are not difficulties in our way could not be conquered.