What Document is Needed for a Tibet Tour

With the opening of the Tibet Railway and the construction of more airports, Tibet is more accessible for international tourists than ever before. However, to preserve the distinctive natural environment, the rare cultural relics, and the local customs of Tibet for years, and also due to limited transportation and other tourist facilities in Tibet, overseas tourists can only travel to Tibet in groups organized by a travel agency or by the offices of the Tibet Tourism Bureau (TTB). As a result, certain documents for traveling must be obtained before entering Tibet, except valid passport and China visa.
In summary,there are four kinds of documents required for foreign tourists who want to travel freely in Tibet.
1. Tibet Entry Permit 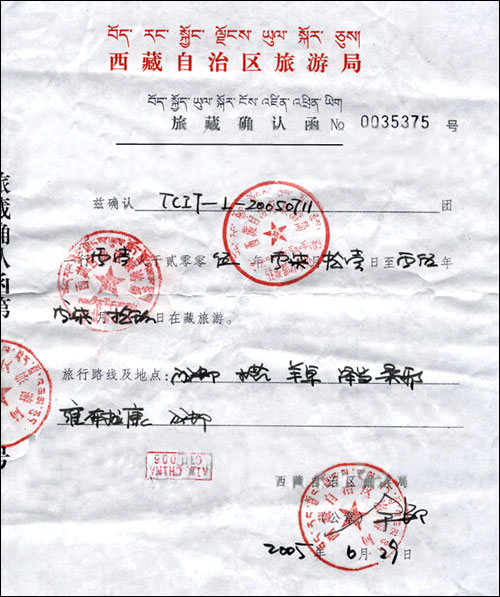 Tibet Tourism Bureau (TTB) permit, also called Tibet Entry Permit, is issued by Tibet Tourism Bureau. It is necessary for entry to Lhasa or any other parts of the Tibetan Autonomous Region. When you fly from any city to Lhasa you will need to show this permit when you check in at the airport. Furthermore, whenever you buy a flight to Lhasa you need to show this permit.
Who should apply for the Tibet Travel Permits?
Overseas tourists (Non-Chinese passport holders) and Taiwanese must obtain a Tibet Entry Permit issued by the TTB. Tourists can join a group organized by a travel agency, which will usually handle the permit for them in advance.
For individual tourists the offices of the TTB will do it for you. One can only obtain the permit where he or she departs for Tibet.
Visitors to Tibet from Chengdu, Golmud, Xi'an, Chongqing, and other places can only buy their airplane, train, or coach ticket and check in at the airport after submitting the original permit.
And visitors from Katmandu still need the permit to obtain a paper visa or a signature on your visa from the Chinese Embassy in Nepal to buy their airplane tickets and enter Tibet. While in Tibet, you are not allowed to travel alone even with the permit.


► Tibet Tourism Bureau can issue Tibet Travel Permit for people with tour passports and visas
► If your visa type is “F”, not “L”, you also must or have to apply for Tibet travel permit with Tibet Foreign Affairs Office
► Businessman who want to invest money in Tibet and enjoy the tour during their spare time can get Tibet travel permit from Tibet Economic Development & Foreign Trade Committee
► Journalists, government officials, ambassadors could not get Tibet Travel Permit even though carrying the tour passport
► Taiwanese can get Tibet travel permit from Taiwan Affairs Office Tibet Branch.
What documents should be submitted?
The necessary materials to apply for the Tibet Permit are similar to those demanded for a visa including
The permit usually takes 2 days to issue. However, it is best to allow at least two weeks for mailing and processing. When you receive the permit you will have enough time to arrange the tickets, hotels, and your preparation for rest.
2. Passport & Visa
Overseas tourists to Tibet must hold a valid passport issued by his or her homeland and a visa issued by a Chinese embassy or consulate. However, tourists from a country that has agreed upon a visa-free protocol with China can visit Tibet without a visa with the max staying time of 30 days.
More details about China Visa can be found in China Visa FAQ page
3. Alien's Travel Permit (PSB Permit)
If you plan to travel into the closed areas of Tibet, such as Tingri, Dromo, Nyalam, Nhagartse, Medog ,Burang and Pemako counties, you must further apply for an Alien's Travel Permit which is issued by the Public Security Bureau (PSB) of Tibet. The opened areas of Tibet currently only cover about 16% of the whole region, so apply for one if you plan to have a deep exploration of the land.
These documents can also be done by your travel agency. The information you need to submit is similar to those required for the Tibet Entry permit.
4. Other Permits
Travel into sensitive borders such as Mt. Kailash and Eastern Tibet still needs permits from the Military Area and Foreign Affairs Office of Tibet. A permit from the local Cultural Antique Department is also needed if you go to Tholing Monastery, Ruins of Guge Kingdom (Tsaparang) in Ngrai.

The government of Tibet is preparing to simplify these procedures now so this mysterious land can be unveiled to the world. Soon traveling to Tibet will be less of a headache.