My DIY Trip to Shangri-La

As the altitude of Shangri-La is more than 3000 meters, the travellers who first get there might experience the highaltitude reaction,normally they would feel headache,chest distress and even cannt breathe after strenuous excersise. My advise is to keep costant speed during walking and not to run and jump,eat enough and take good rest after the day tour.Your body will adapt to it gradually.
According to our plan, we will take the tour to Pudacuo National Park on 18th and might go to Songzanlin Monastery which is not too far away from Shangri-La county, if we have enough time.The fare for the private van is RMB100, including the round trip to Pudacuo National Park and Songzanlin Monastery.


About 22 kilometers to the east of Shangri-La, it is the only national park in China, “Pudacuo National Park”. The park's name "Pudacuo" comes from the local Tibetan word for the divine assistance that ensures boat passengers a safe journey across the many lakes dotting the area. Pudacuo National Park covers an area of 1313 square kilometers, with Bita Lake in the south and Shudu Lake in the north. Between these two lakes, it is Luorong National ecological culture tourism village and Militang Alpine Pasture. We need to change to sightseeing car when getting into the park. The newly built sightseeing route is about 69 kilometers, connecting the two lakes, the village and the dam.
The entrance of Padacuo National Park 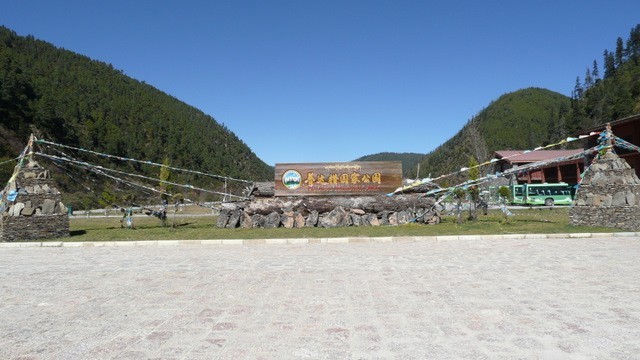 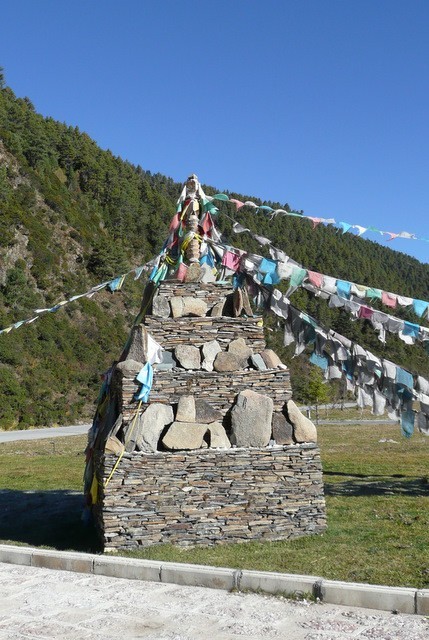 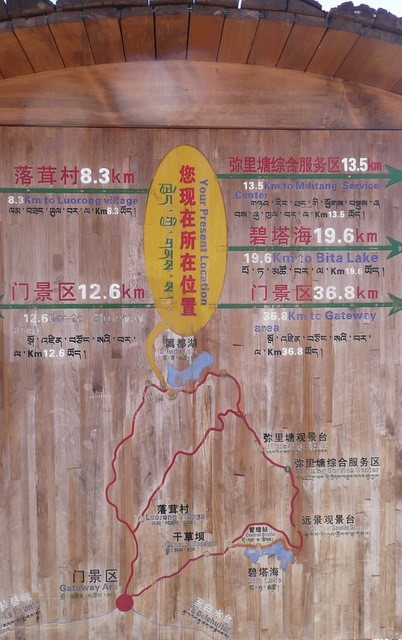 The mapsign in the park. The main scenic spots are Shudu Lake, Militang Pasture and Bita Lake
TThe first tour stop: Shudu Lake
The two beautiful freshwater lakes Shudu Lake and Bita Lake enjoy the fame of Pearl of the Plateau. The delicious Shudu Schizothorax and Bita Heavy Lip fish are abundant in the two lakes. 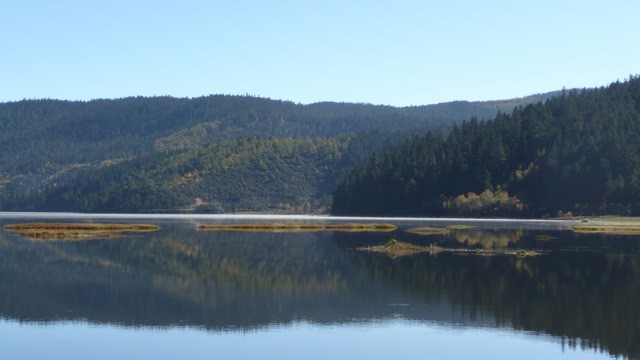 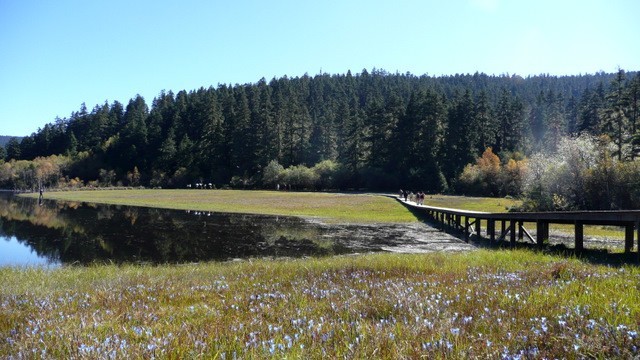 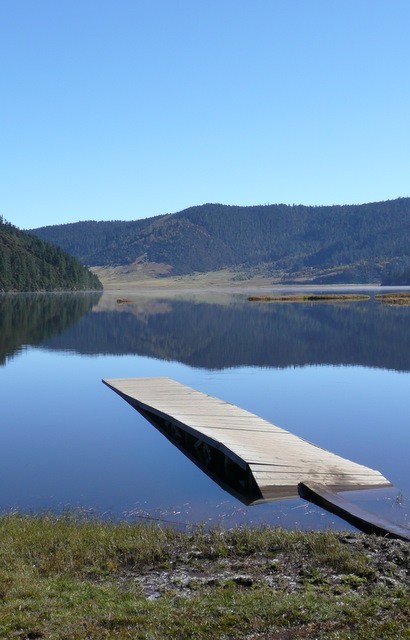 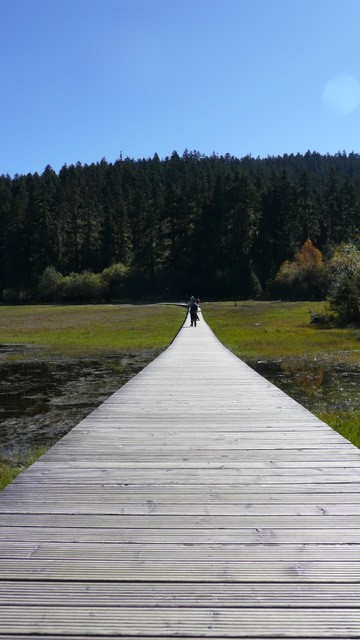 We can see clearly that the plantation which is in the shadow is still covered by the white frost. 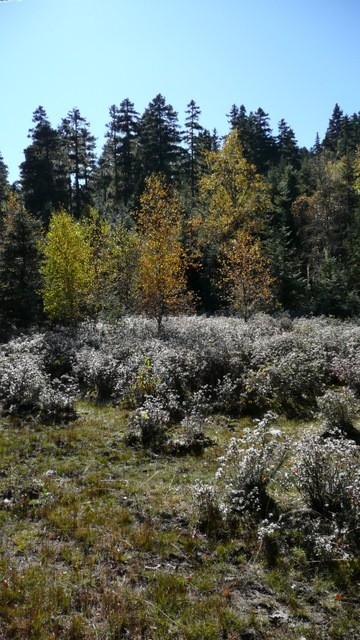 Usnea, also called Linhuzi, is a homobium of fungi and alga, which grows at places with very little pollution. 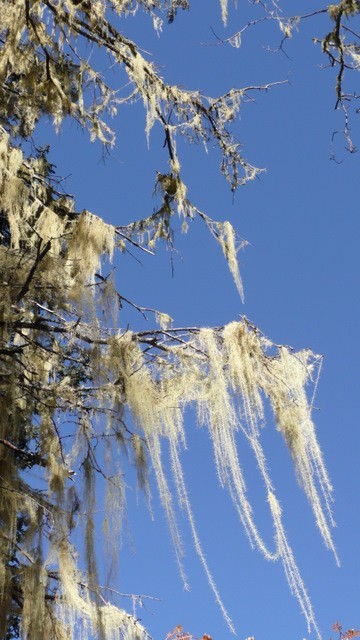 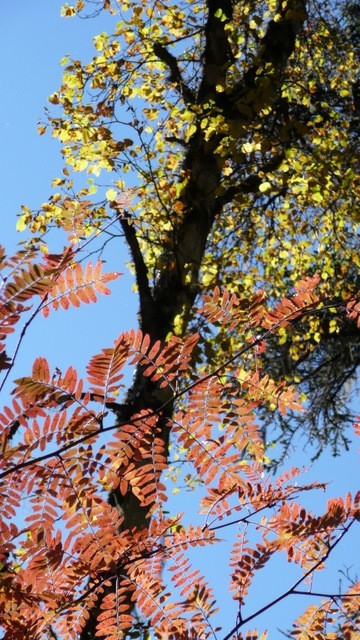 The second tour stop: Militang Plateau Pasture
The sightseeing car goes through the quite forest and we see a lot of tall spruce trees and fir tress along the road. . 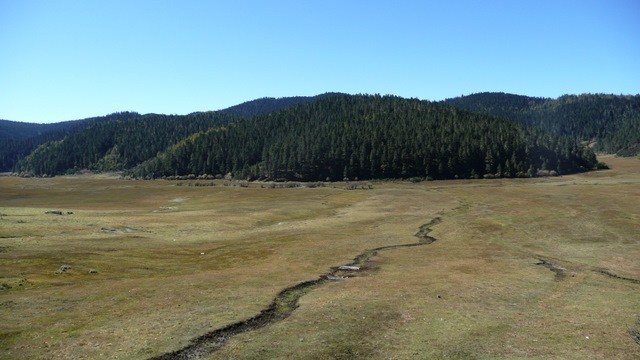 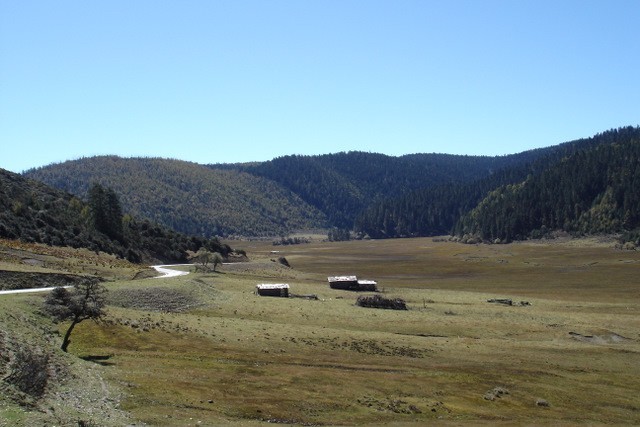 The third tour stop: Bita Lake
Bita Lake is the most beautiful lake among all the lakes in Shangri-La. Located in the deep mountains and forests, Bita Lake is the famous freshwater lake in northeast of Yunnan. Bita in local tibetan word means the oak trees felt. In May and June, the fish in the lake eat the cuckoo flower petal floating on the water and get drunk, which is a famous scene in Bita Lake. 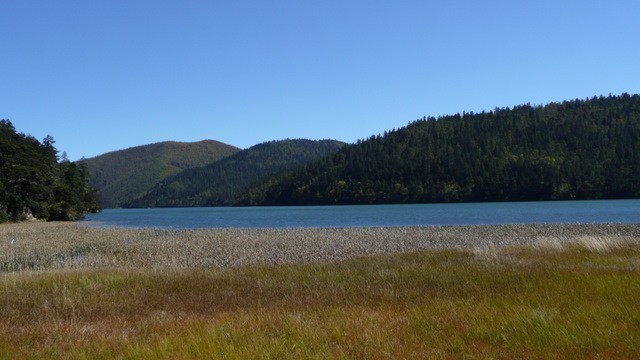 There are two routes to tour the Bita Lake. First one is after the panoramic view from the sightseeing car, taking 1.3 kilometers walk to the dock of the lake and walk back. Second one is walking 4.2 kilometers alone the lake. If you choose the first route, the sightseeing car will pass the highest spot at a level of 4159 meters, where you can get the whole view of Bita Lake. I would recommend trying the two routes if time permits. 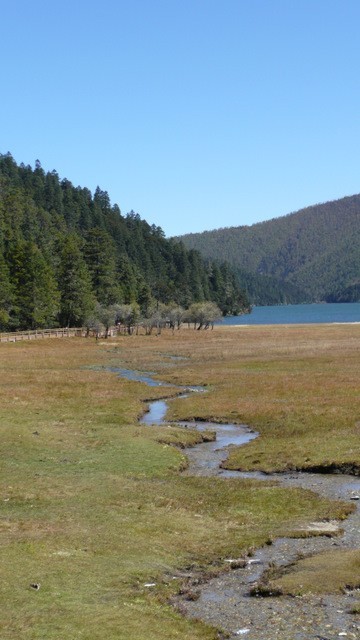 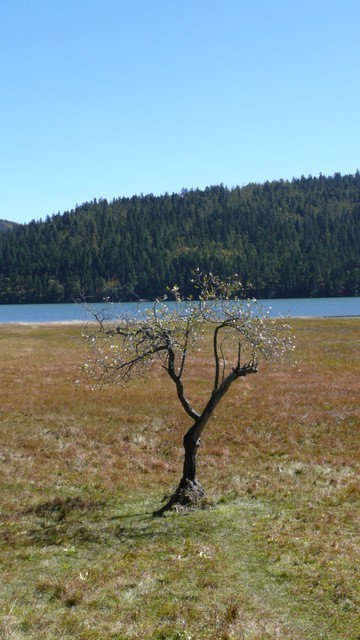 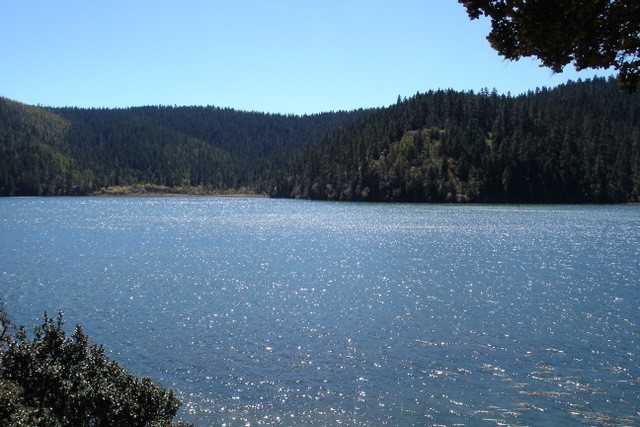 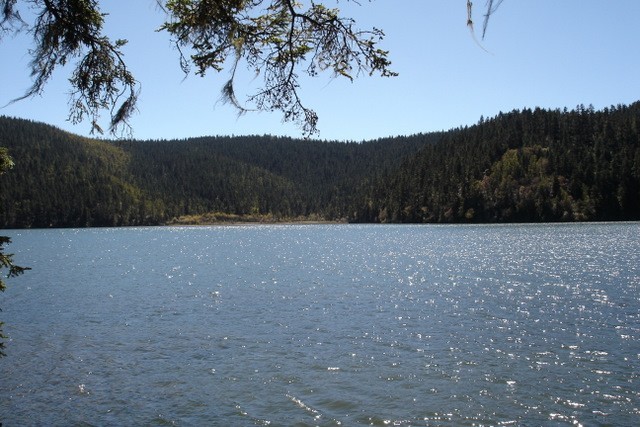 Coming out of Padacuo National Park, we get in the van and drive to the Songzanlin Monastery which is about 5 kilometers away from Shangri-La county.

Introduction of Songzanlin Monastery
Songzanlin Monastery was built in 1679 after the approval of Emperor Kangxi in Qing Dynasty. The site was choosen by the 5th Dalai Lama by divination. It took three years to finish the construction and the layout copied the Potala Palace. It was granted the name Guihua Monastery by Emperor Yongzheng in Qing Dynasty. It is one of the famous thirteen monasteries in Tibetan area and also the largest-scale Tibetan Buddhism monastery in Yunnan, so it is also named “ Small Potala Palace”. 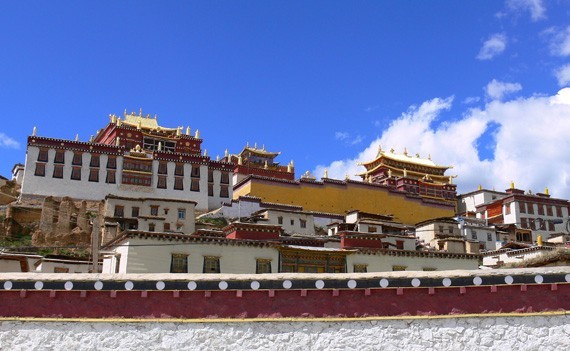 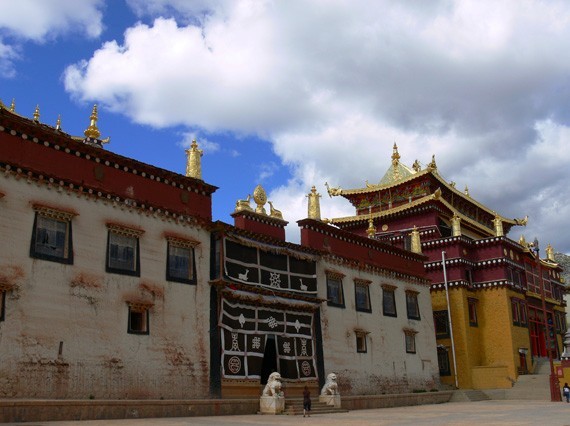 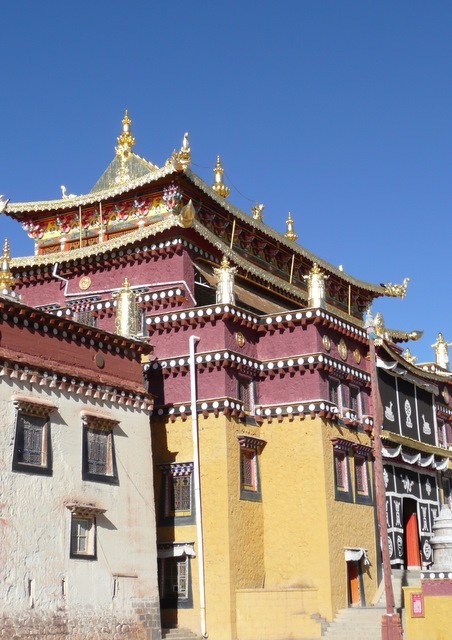 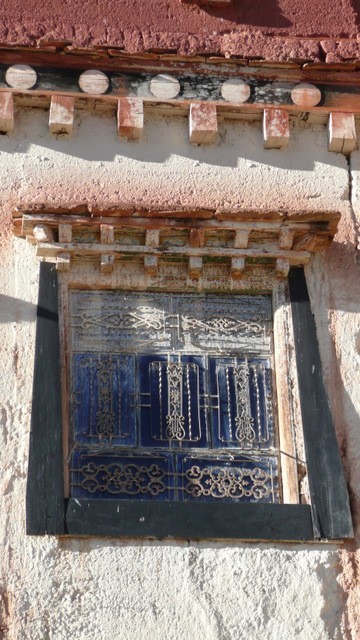 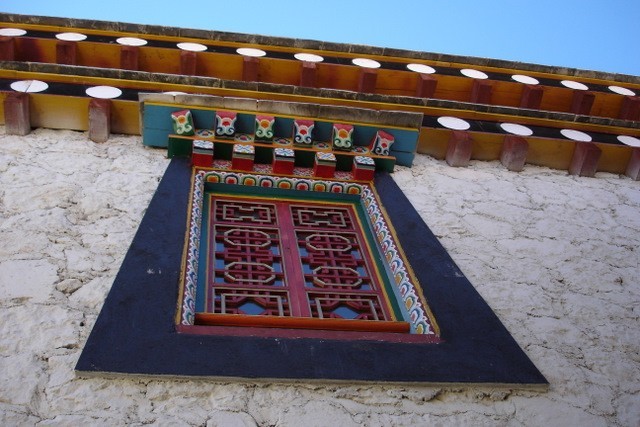 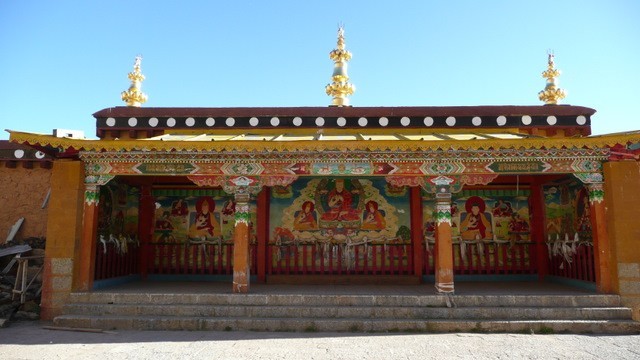 There are two remarkable frescoes in Songzanlin Monastery. One is named “The six paths of metempsychosis. 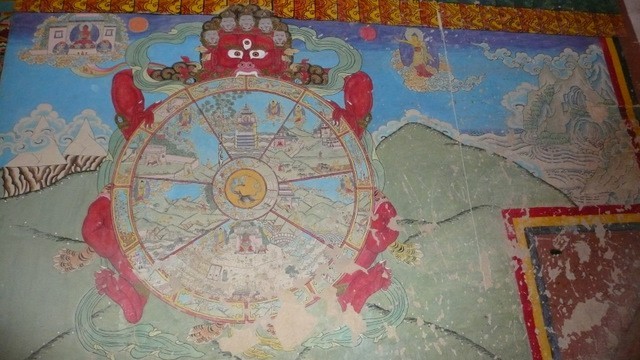 The other fresco is a picture of four animals of grouse, rabbit, white elephant and monkey living in harmony 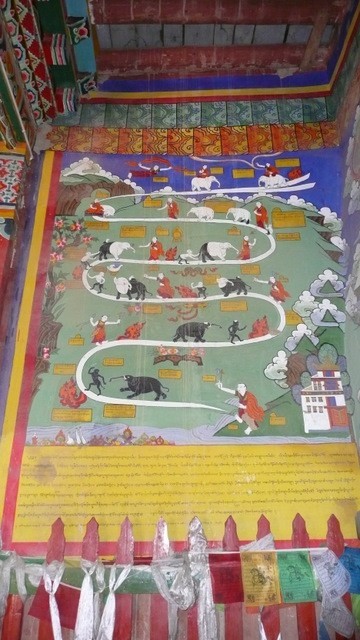 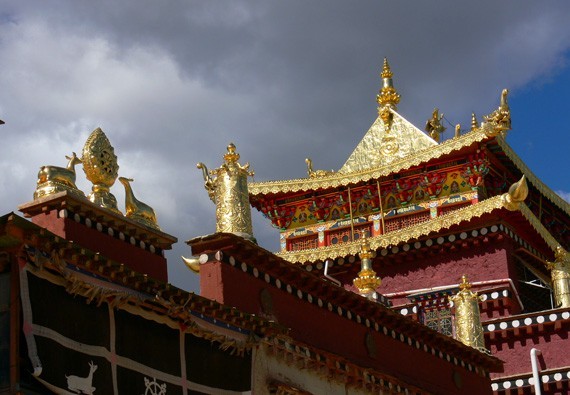 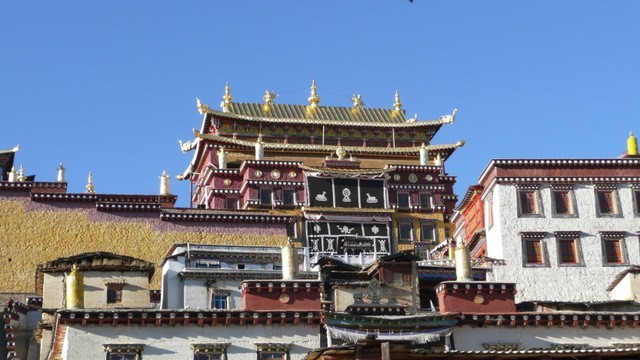 Next: Get Close Distance to Panda in Chengdu

As a pioneer and leading B2B wholesaler website for travel agents, Top China Travel aims at creating the fastest and most useful access to travel agents from all over the world to explore and expand their market to China! My team and I are always focusing on how to provide our partners and friends with the superior service. We are on the way.