Besides Xian City, a large munber of tri-colored glazed pottery wares were excavated from Luoyang. Tang tri-colored pottery has been produced for over 1,300 years. The distinctive red, green and yellow colors display the unique style of the potters of the Tang Dynasty.
It represented a peak in the development of Chinese ceramics and was already well-known in the world in its time. Tang Tri-colored Pottery was developed some 1,300 years ago by drawing on the skills of Chinese painting and sculpture and employing on the bodies the techniques of clay-strip forming and incising. The lines thus produced were rugged and powerful. Then glazes of different colours were painted on and, while chemical reactions took place in the process of firing in the kiln, they dripped naturally so that the colours mingled with each other and formed smooth tones. Related Keywords: Ceramic, Statues, Pottery, Arts. 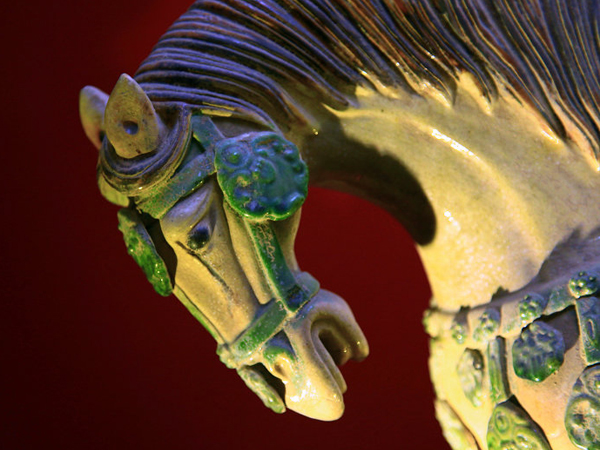 Luoyang Tang Tri-colored Pottery
As another historic city in China, Luoyang has a history of over 100 years of producing imitated tri-colored glazed pottery wares. Thanks to the efforts and exploration of the artisans of several generations, the artic level and techniques of this treasure produced by Luoyang have become consummate with each passing day.

The Features of Tang Tri-colored Pottery can in three ways. Firstly it is the modeling. Its shape is different from the general shape of other different crafts.

• Modeling
Modeling of Tang Tri-colored Pottery is quite various, including animals, life utensils and figures three categories, but especially in the majority of animals. This may be related to the historical background. In ancient China, the horse is one of the important means of transport. Horse is important on the battlefield, farmers need horses plow, transportation also needs a horse, so among unearthed pottery, many of them are horse-shaped. The second is the camel, which is probably related to the foreign trade at that time. Camel is one of the means of transport for long trek at that time, and a camel is quite important along the Silk Road as a means of transport. So, artisans reflect the history in the crafts. As for figures, it is generally palace maids, which reflects in the court of life at the time. 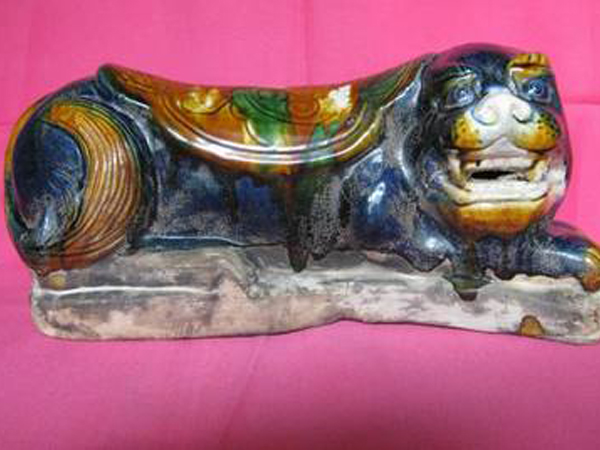 Luoyang Tang Tri-colored Pottery
• Glaze
Another feature is the pottery glaze. Red, green and white were used on a piece of pottery t simultaneously, which was originally pioneered in the Tang Dynasty. But artisans cleverly used of glazing method. They staggered and interlace red, green and white three colors. Then after being fired at a high temperature, glaze melt and flow, poured to form a unique process flows. After it was finished, the three colors turned to a lot of colors, which is characteristic of the pottery glaze.

• Place of Origin
The origin place is at Xi'an, Luoyang and Yangzhou, where are the connection point of the ancient onshore and offshore Silk Road. On the ancient Silk Road, means of transport in Tang Dynasty is mainly by camels. One can imagine, in the desert, and the camel and people trekked together for a long time, so there is a sense of intimacy between the human and camels. So it makes sense that most of the modeling of Tang Tri-colored Pottery are horses or camels.