Guanqian Street lies in front of the Xuanmiao Taoist Temple, and so it was called Guanqian, which in Chinese literally means "in front of a temple".  It is a historical street that is over 150 years old and is known far and wide because of the century-old traditional shops like Daoxaingcun Confectionery Shop, Qiantaixiang Silk Shop, Huangtianyuan Round Dumpling Shop, which were all established here.  Gourmands should not miss the section that stretches from Bifengtang to Taijian Alley, where restaurants featuring authentic Suzhou cuisine are located.

The street runs approximately 760 meters long and is divided into eastern, middle and western sections. The eastern part is filled with ancient buildings of historical significance. The temple is located in the middle section of the street, and in the western part are some stylish shops.

The street contains many features, including all kinds of century-old stores, like Huangtianyuan, Sanwanchang, Caizhizhai Daoxaingcun, Guangnanju, Yeshouhe, etc. which gain an international reputation. Tourists at home and broad are attracted by these century-old shops because there is variety of classic dishes in Southern China style available in those reputed shops. Some of the stores have a long history of more than 100 years, which offers deep impressions on tourists. A lot of the tourists visiting Guanqian Street just come to enjoy the delicious food. Precisely, the existences of those century-old shops that make the Guanqian Street not only become a class commercial street, but also reflect the culture and history of Suzhou. 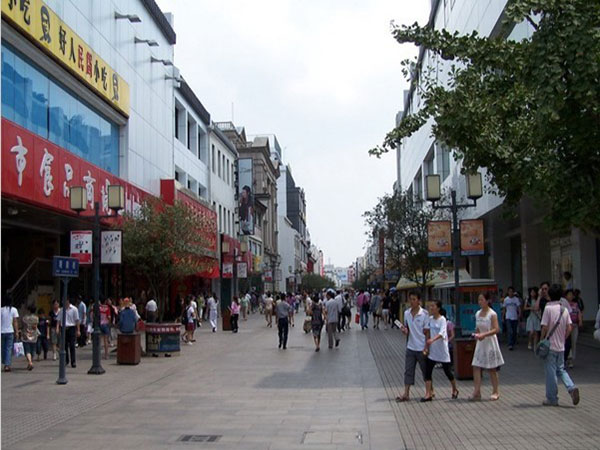 Going for a stroll on Guanqian Street is a favorite pastime of the locals. Now, the restored street attracts not only Suzhou residents but also visitors from other parts of China and abroad, as it is an attraction that is a modern blend of business, culture, religion, and culinary delights