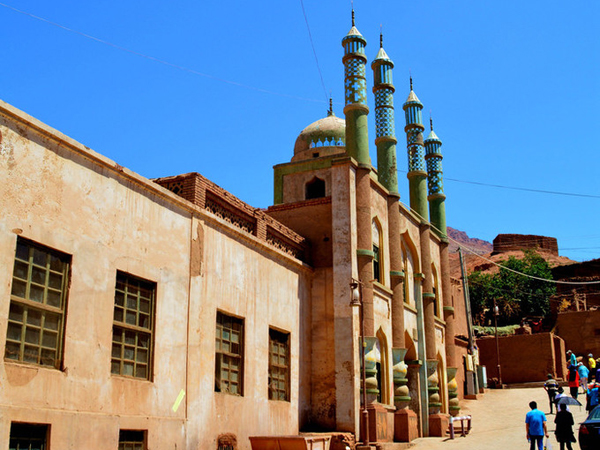 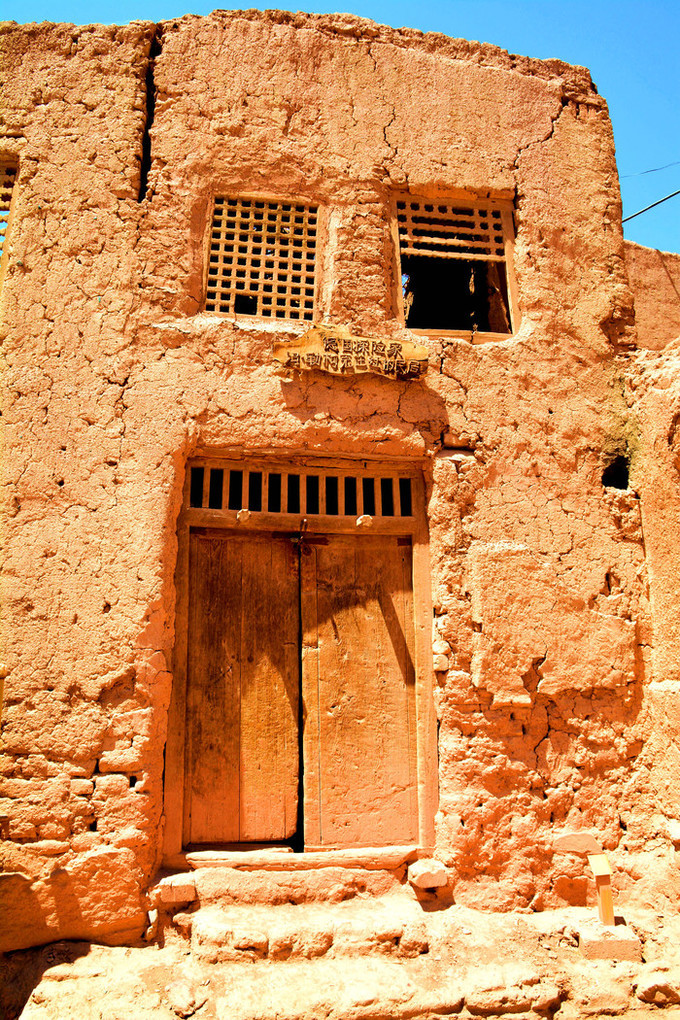 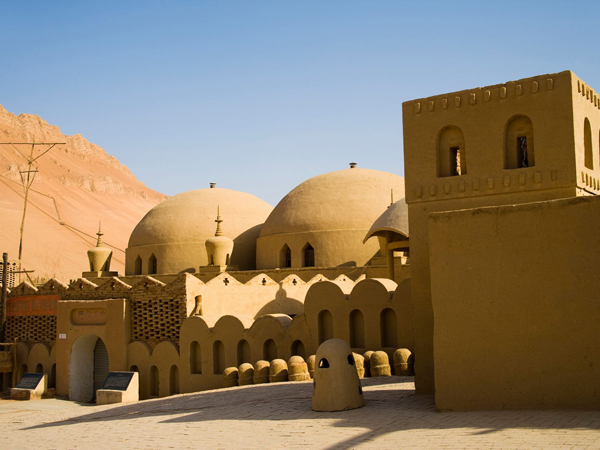 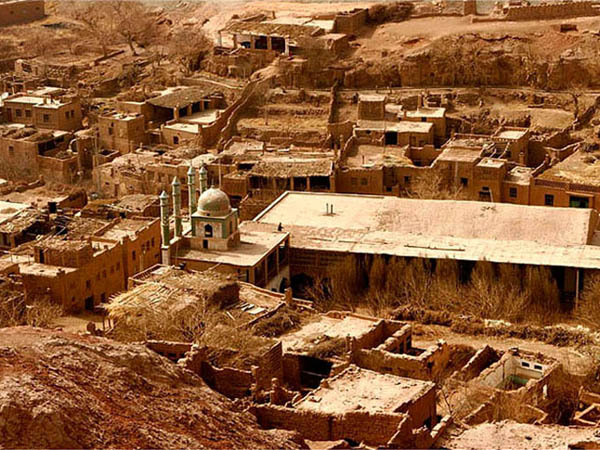 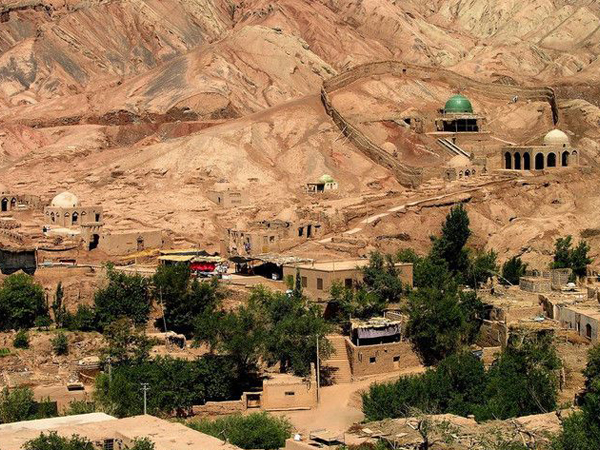 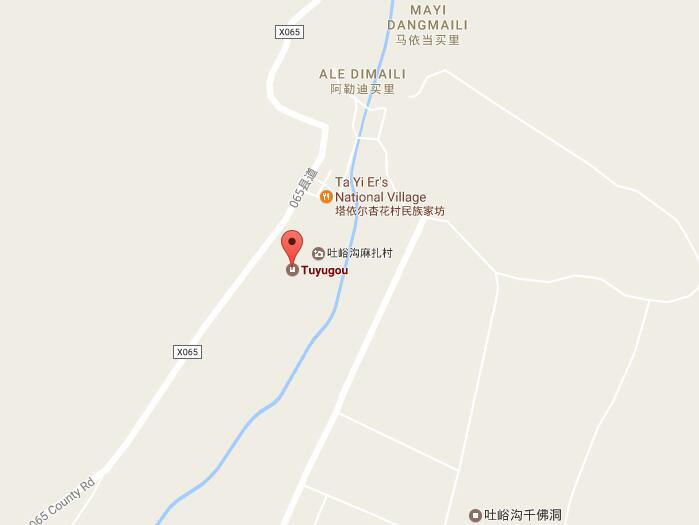 Tuyuk Valley locates at Shanshan County, Turpan city, Xinjiang province. Turpan city is about 55km away from on the east. It was a sacred place for Buddhism and Islamism.

Tuyuk Valley is the most mysterious place in the west of China and a place several famous religious culture crisscross. With more than 1700 years of history, Mazar village in Tuyugu Valley is the oldest surviving Uighur village, being designated as “historic and cultural village in China”. Mazar village keeps the oldest Uighur ethnic customs and enjoys a reputation of being the “folk customs fossil”. The earth building in the Mazar village radiates yellow clay charm. Now it’s a sacred place for Muslim, an important dak for religious researchers, an ideal fairyland for photographers and artists.

【Tuyuk Canyon Scenery】
The canyon stretches 8km from SuBeixi village in the north to ancient Mazha village in the south (SuBeixi cultural heritage site, one of the three ancient cultural heritage in Xinjiang, locates at SuBeixi village); the average width is about 1km. The flaming mountain is the highest mountain in the Tuyugu Canyon, with an elevation of 831.7 meters (2728.7 feet) above sea level. The Tuyuk Canyon cuts the flaming mountain longitudinally from north to south, which is the uncanny workmanship of nature. When you walk along the road, you can enjoy the splendid and magnificent canyon scenery. It’s rare to see the magnificence, strangeness, danger, and elegance of a canyon like Tuyuk in other place.

【Tuyuk Thousand-Buddha Grottoes】
As one of the three most famous Buddhism grottoes in Xinjiang province, Tuyuk locates at the middle piece of Tuyuk Canyon. It has more than 1700-year history. In the Southern and Northern Dynasties Period (420-589), Tuyuk grottoes were an important place for Buddhism, until Tang Dynasty, the frescoes in the grottoes developed to a new phase.

From the 1700 years it was dug, it has been demolished by humans or nature. There are 94 grottoes, 46 grottoes of which have serial numbers, while only 8 grottoes remain frescoes. The surviving frescoes can still show us the splendid ancient culture and civilization, attracting many Buddhism scholars who major in Buddhism history, Buddhism art history and ancient architectures to study. The historical value and art value Tuyuk thousand-Buddha grottoes provide are estimable.

More than 90% frescoes due to imperial depredation and human damage were destroyed. There are only 8 grottoes with very few frescoes written by old Uyghur language.

A story goes: in the early seventh century, Muhammad created Islam. His apprentice took another 5 apprentices to China, who was the first group preaching in China. Going through significant hardship, they finally arrived at Tuyuk. Under the help of shepherd in local, these 6 apprentices decided to stay here to preach. From then on, Islam was prevailing in Tuyuk. After the six apprentices and the first Chinese Moslem died, the place they were buried is Tuyugu Mazar.

According to the record from a German explorer Albert Von Le Coq (Albert Von Le Coq: Albert Von Le Coq (1860~1930), German explorer, was an important figure as a member of German exploration team coming to Tuyuk Valley at the beginning of 20th century. He was famous for cutting away Xinjiang’s frescoes. He stole away a great number of precious cultural relics including frescoes, Confusion classics, pottery, wood ware, etc., bringing great damage to cultural relics in Turpan prefecture, which was recorded as Underground Cultural Treasures of Xinjiang written by him). Since 20th century, tourists from Turkey, India and other Muslim countries come to this place to travel. Now, numerous Muslims Ningxia, Gansu, Turkey, Hong Kong etc. go on a pilgrimage to Tuyugu Mazar, where is an important sacred place for Islam. Mazar witnesses the rise and fall of Buddhism and Islam’s prevalence in Xinjiang province.

Tuyugu Mazar can be regarded as the first sacred place for Islam in China, which is Chinese Mecca. According to the local Muslim customs, someone who wants to pilgrimage to Mecca should pilgrimage to Mazar first.

【Tuyu Ancient Village】
Tuyugu ancient village, an old and peaceful village, locates in the south exit of the Tuyugu Canyon. With more than 1700 years of history, Tuyugu ancient village is the oldest surviving village in Xinjiang province. It distributes around the mosque, and about 200 families live here. The ancient village completely keeps the Uighur’s tradition and customs. People start to work at sunrise, finish to work at sunset. They speak in Uighur language and wear ethnic clothes. When they visit to friend’s home, they drive donkey cart instead of walking, which is an old and traditional means of transportation. No matter the old or the young, people live here wear happiness and peace on their face, presenting a “stand aloof from worldly affairs” lifestyle to people.

In ancient village, people inherit the two thousand tradition of using yellow clay to build. Some architecture combines Buddhism culture with Islamism culture. Most of the buildings are kiln building made of yellow clay, with different size and different height. The building trait is warm in the winter and cool in the summer.

Food in Turpan is nearly the same with that in Urumqi, broadly contains food made of flour, Cantonese cuisine, Sichuan cuisine, Uighur-flavor snack, Muslim food etc.. If people in Turpan were asked what kind of food they like best, they may only answer you grape or other fruits. In this place, you may find that the local people eat grape or other fruits as staple food. Fruit feast is a local and special food in Turpan. Fried roasted meat, fried meat threaded by toothpick, cantaloupe in hot toffee.


How to Get to Tuyuk Valley

The Tuyuk Valley is 38 km away from downtown; tourists can choose chartered bus/car or take the long-distance bus to get there.

1. Xinjiang province is an area with high ambient ultraviolet radiation; all you need is a hat and some sunscreen.
2. Due to Xinjiang province is dry and hot, you need to prepare enough water and lotions to hydrate your body and skin.
3. Mazar Village is not open to non-religious; in order to avoid unnecessary conflict, please don’t close to it. Don’t take pictures without permission.
4. Because of Xinjiang’s unique geographical location, large temperature difference between day and night, please prepare some overcoats to keep warm.