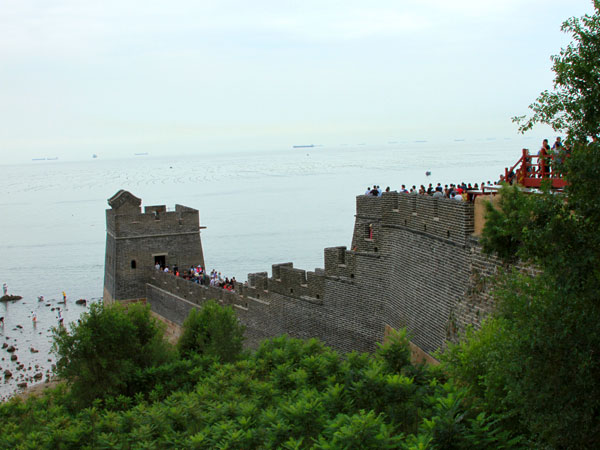 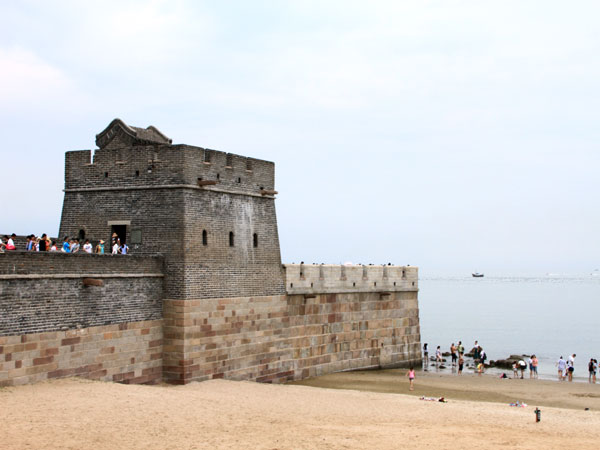 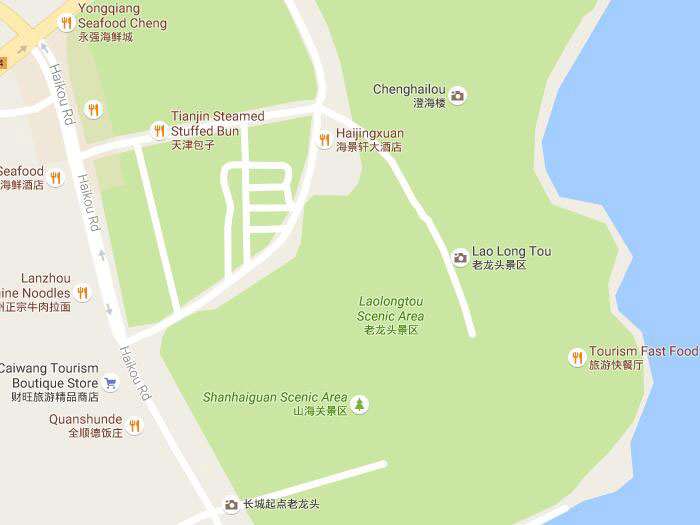 
Laolongtou which means Old Dragon Head is a site located in the south side of Shanhaiguan Pass. It is the entrance of the eastern Ming Great Wall of China. There is a stone city as an entrance to the Bohai Sea. This stone city stretches 23 meters into the sea like a dragon drinking water, hence its name.

This part of the Great Wall was built in the 7th year of Wanli reign in the Ming dynasty (1579) and was mended in the 7th year of Kangxi reign in the Qing dynasty (1668). Emperors Kangxi and Qianlong of the Qing Dynasty would stop here for a visit on their way to Fengtian (Present - day Shenyang) to worship their ancestors, which makes the city even more worthy of its name. Standing at Laolongtou, facing the misty sea, visitors can easily picture Emperor Qin (221-207 BC), the first emperor of China, sending people into the sea here to find a drug that would give him immortality. You can see the Great Wall as it zigzags over the rolling mountains like a giant dragon to the north. Looking to the south you can see the vast expanse of sea stretching far to merge with the sky. At this moment you feel as if you could embrace the whole world.

Old Dragon Head is not only an ingenious military system which extends into the sea, but also a superb scenic spot and the only place of the Great Wall where the beauty of the pass, the mountain, the sea and the surrounding scenery form an integral entirety. Looking down from Clear Sea Building, you will see "the stone city on the sea" encircled by white waves that " come high and low, much like piles and piles of snow." Looking far into distance, you will have a broadmind and be filled with lofty sentiments at the sight of the blue sea connecting with the blue sky and the surging mighty waves striking against the towering mountain. What is more fascinating is that sometimes while wind blows violent waves on the thundering sea, and trees and grass on the shore respond to the spanking breeze, people on Clear Sea Building feel nothing of the storm at all. It is the wonderful scene, " Quiet Wind in the Pavilion at Sea", famous ever since ancient time. It is also said that you may see "pearls at sea" if you climb the building at night. In deep, quiet night, when there is no wind, on the sea surface facing the building, suddenly appear count - less sparkling stars sending forth dazzling and enchanting gleams. Some people say that it is caused by the mussels which Old Dragon Head is rich in. If those mussels open their shells and the exposed pearls catch light, the rarely marvelous spectacle will appear.

Old Dragon Head, (Take bus 25 from the south gate or train station, taxi around Y10). At Shanhaiguan, the Great Wall juts out into the sea. The original wall is long gone, but an extensive rebuilt section has been put up. Bus 25 will take you there for ¥1. To get onto the wall and into an area with several rebuilt halls, you need to buy a ticket for Y50. If you're content with seeing the wall hit the sea from the other side, turn left outside the entrance and follow the road making a right turn, going through the wall and to the beach. Walk about 200m along the beach to get to the end of the wall.