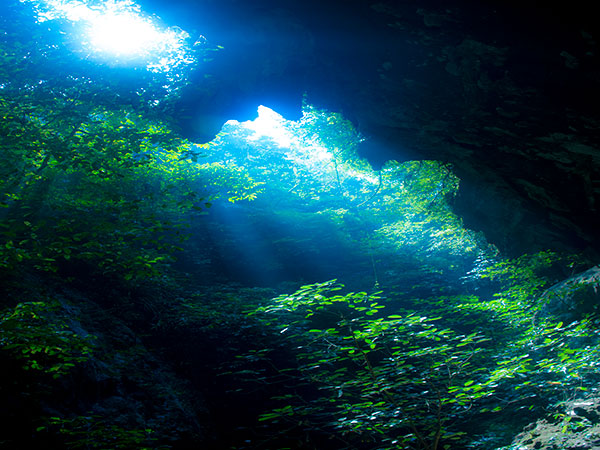 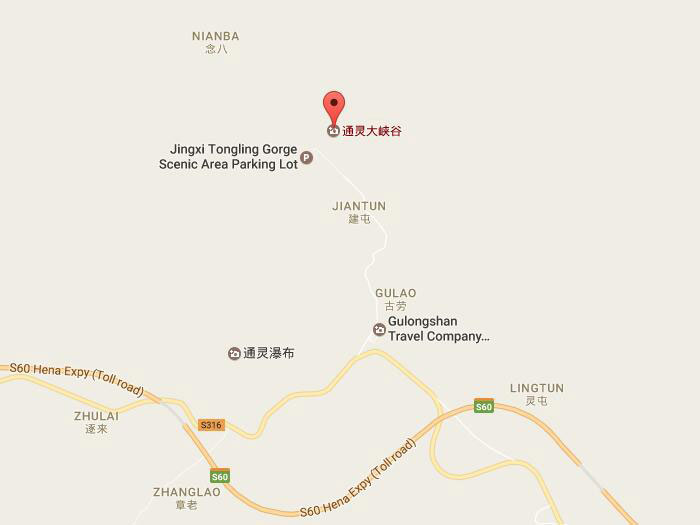 
Known as "small Guilin", Jingxi Tongling Grand Canyon is located in Xinling Village, Hurun Town, 32 kilometers southeast of Jingxi County. It is 230 km away from Nanning City, the capital of Guangxi Province, and 29 km away from the Detian waterfall. It is consists of Nianba Gorge, Tongling Gorge, Gulao Groge, Xinling Gorge and Xinqiao Gorge, with a total length of it is more than 10 km. The canyon is a fully enclosed rectangular Gap. It is about 2800 meters long, 200 meters wide and 300 meters deep. The Nianba Gorge is connected with the rivers and tunnels underground, beautiful and elegant, like a beautiful scar on the planet. The canyon turned out to be a blind valley, due to geological movement, the earth at the top of the valley fell, forming a large skylight, surrounded by steep cliffs and spectacular momentum. A variety of vibrant valuable ancient plants, profound valleys, clear streams and green vegetation make it a beautiful spot. It is also connected with the Tongling Waterfall, which is the highest single-stage drop waterfall in Asia with a height of 188 meters.

【Nianba River】Nianba River originates from Cologne Mountains. It flows slowly down and followed through Tongling Gorge. The water in the river is crystally clear. It is cool in summer and warm in winter.

【Tongling Gorge】
Located in the southern end of Jingxi Tongling Grand Canyon, Tongling Gorge is a fully enclosed rectangular canyon, about 1000 meters long, over 200 meters wide and 300 meters deep. The valley is covered with primitive trees, surrounded by cliffs sharp as a knife, also next to the ramps of overgrown trees. The entire valley was filled with refreshing aura. There are blends of more than two thousand kinds of plants, many of which are rare plants protected by the nation.

【Gulao Canyon】
The Highest mountain in Tongling Gorge is Gulong Mount, with an elevation of 1034.8 m. The canyon is abundant of water and plant resources. The forest coverage rate of the canyon reaches 65.76%. There are about 800 spices of animal and plats, many of which are rare creatures protected by the nation.

【Tongling Huge Waterfalls】
Tongling Huge Waterfalls is 168 meters tall and 30 meters wide, is the tallest waterfall ever seen in southwest China. It hangs over the mountains and falls straight down like a large piece of whitened silk, giving out thunder-like tone. It generates millions of water drops that appear to cover up the sky with bug. When the sun lights above the fog, gorgeous rainbows show up. To the left of the waterfall are the old revoked funeral places. The waterfall falls into a 50-meter-wide deep pool area, which is the origin of water ways in the gorge and underground streams in the cavern. These rivers and streams again shape a huge underground river leading to a new waterfall. Four huge caves are at the entry of the underground river. The caves are deep and bent. If tourists rise 30 meters up the climbing ladder alongside the cliff, they will find out an underground river flowing, falling down along the cliff, and developing into different levels of smaller but crystal clear waterfalls. On the top of the first-level waterfall there are large and various-shaped stalactites. The scenery made of calcareous rock is particularly wonderful.

【Chinese name】: 通灵大峡谷
【Transportation】: you can take a bus at Baise City to Jingxi County and then take a tourist bus to get to Jingxi Tongling Grand Canyon. 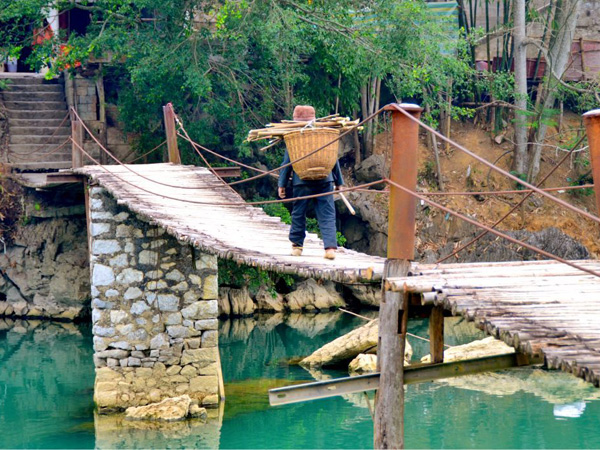