Erdaoqiao International Grand Bazaar integrates Islamic culture, architecture, trade, entertainment and catering. It is the assembling place and exhibition center for tourism products in Xinjiang Uygur Autonomous District, regarded as the Window of Xinjiang, the Window of Central Asia and the World Showcase.

So what is grand bazaar? Bazaar refers to agricultural trade market. Urumqi Grand Bazaar was shaped to a certain scale in Qing Dynasty. But it was re-built as a scenic and commercial spot, combining tourism, national trade, catering, ethnic arts showing, and retail in 2003. The new grand bazaar was built with Islamic architecture style, recreating the prosperity at the period of Silk Road.

It is the largest bazaar in the world currently. It attracts thousands of visitors from other cities in China and overseas each year due to the good location in the city of Urumqi and a variety of goods, such as national dresses, scarves silver and gold jewelry, carpet as well as handicraft. Besides, it is easy find all kinds of fresh fruits, dry fruits and local flavors, such as Nang (a kind of crusty local pancake), roasted mutton cubes, all kinds of noodles, ect. Besides, the products sold at Urumqi International Grand Bazaar are cheaper than other places in the city, such as airport, hotel, other scenic areas. 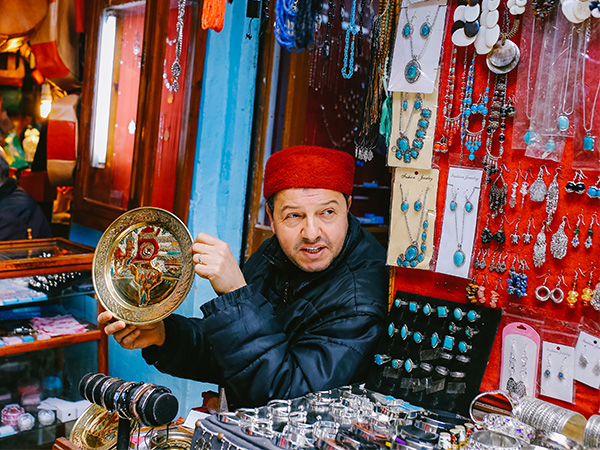 Besides, another attract to visit Grand Bazaar is to enjoy the ethnic culture and customs. You could find a lot of traders and shoppers, who might be Uygur, Kazak, Hui (Muslim Chinese), ect. wearing various national dresses. It is quite different scenery. Local people are plain and kind to visitors. When you say hello to them, they always greet back to you with big smile. Erdaoqiao International Grand Bazaar is really a place worth to be included into your Xinjiang tour plan.

It is suitable to visit Xinjing from May to October, but the best time should be July, August, September and October, when tourists could enjoy the wonderful natural view, but it is also fruits harvest season. Then do not miss the grand Bazaar at that time.