A Brisk Walk Tour To See the Old Architecture in Qingdao

Qingdao is a coastal city in Shandong Province, northern China. It is also called the “City of Beer” and “the City of Sailing”. Main attractions in Qingdao include Mt. Laoshan, May 4th Square, May 4th Square, Trestle Bridge, Qingdao Olympic Sailing Center, etc. Most of them are located in the Old City area in this city. Qingdao city is not very big, having a brisk walk to experience some of the culture and atmosphere of the city is a wonderful option if you are energetic. I spent one impressive day in Qingdao to see the beautiful and exotic buildings in the old town. The trip was quite interesting and gave me another impression on it.

The starting point of my one-day tour is from Qingdao Railway Station. The train station was originally built by German, and then reconstructed by Chinese. It no longer has the charm as before. Opposite the train station is also a very nice German-style architecture with golden dome, now there are many restaurants located inside.

This is the Qingdao Municipal Public Security Bureau. The buildings has a history of about 100 years. 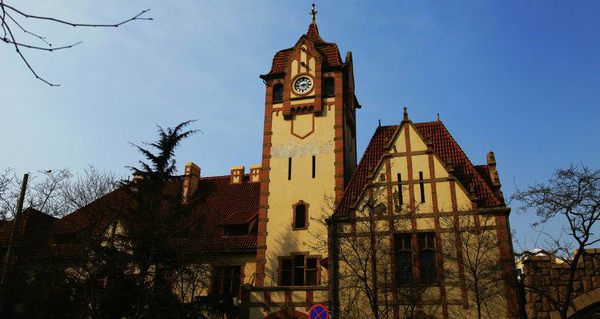 The life style in Qingdao pace of is quite slow. They are easy to be satisfied with their life. Spending stroll along streets or going for a walk in a quiet place with a bird with a bird is typical of the elderly living in Qingdao. 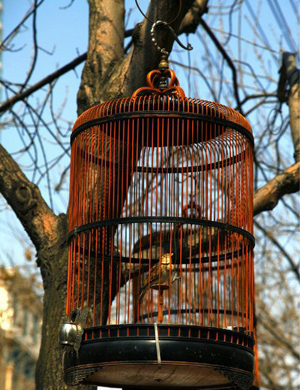 I wandered along the nearby up and down trails and got to Zhongsan Road, which is a hundred-year old street in this city. A few decades ago it was the most developed business area in town, but with the rise of the New District in Eastern Qingdao, the glory of this place has become history. In west of the street was the financial center of Qingdao. In the twenties and thirties, many banks and pawn shops were located there. The building has now become the People's Bank of China Qingdao Branch. Ancient bronze doors still reveals breath of the time. 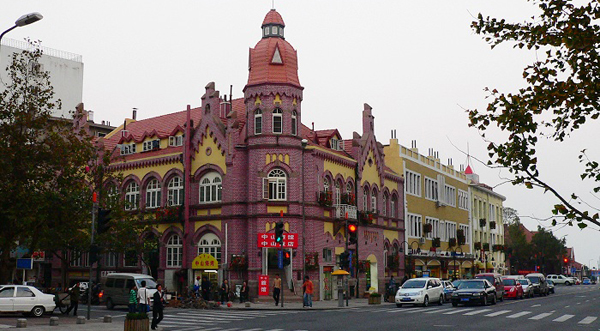 This is Feicheng Road. At the end of it is the famous Cathedral of St. Michael Eyre with a hundred years’ history, which was the largest church in China. It was paved with local granite. Both sides stands old European architecture. 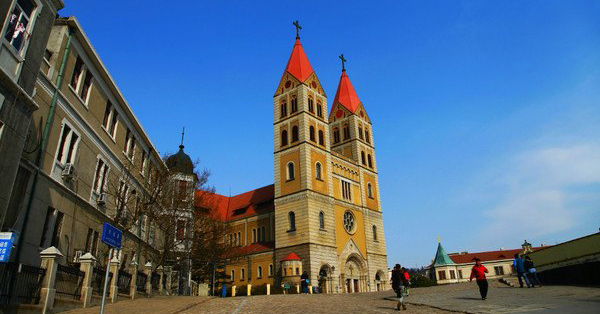 Today, the Catholic Church has become a popular place for wedding photography.

Streets in Qingdao Old Town are built against hillside, reflecting the concept to respect nature and the principles of local conditions. For most of roads in Qingdao are ups and downs with corners, riding bikes is quite labored. 06 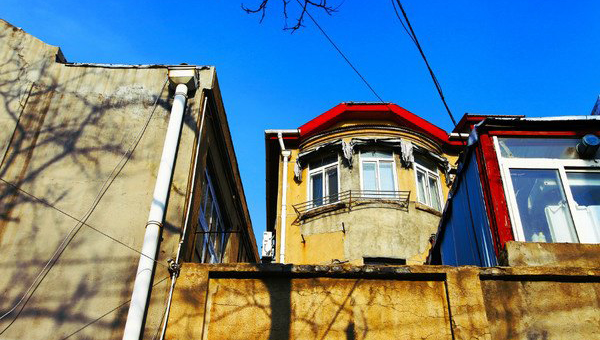 In Huangdao Road, there is a centuries-old market extending to the Quartet Road Road and Pingdu Road. There are all kinds of old shop at the both side of it. 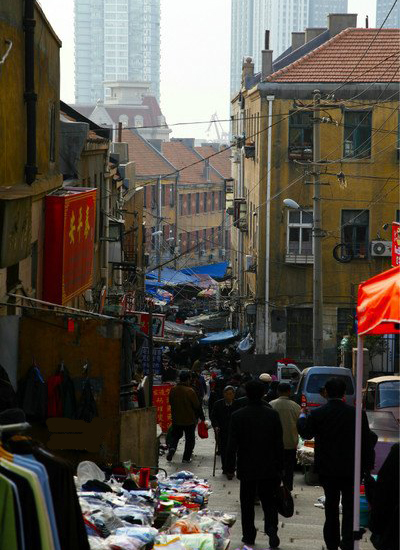 Guanhai Hill (View-Sea Hill) was original golf courses of German and Japanese, and later became a view platform of sea. But because of dense trees and a number of high-rise construction in Zhongshan Road, here is no longer the best place to overlook the old town. 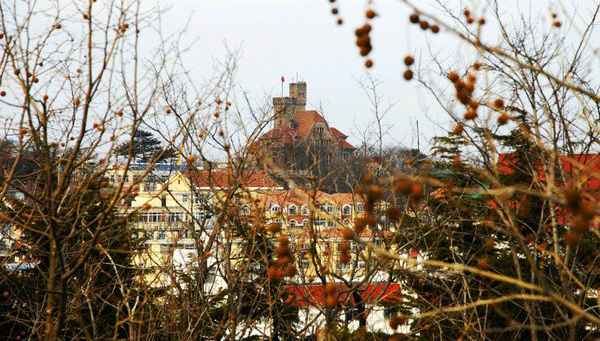 This is Wang Huo House, it was originally used to observe the fire alert a hundred years ago. It was almost demolished while the Old Town was reconstructed. But it retains due to protestors’ mediator. 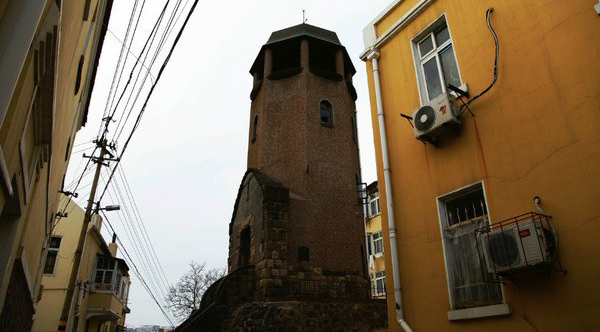 The red building is St. Paul's Church, with the unique style of the Middle Ages, but generally few tourists come here. 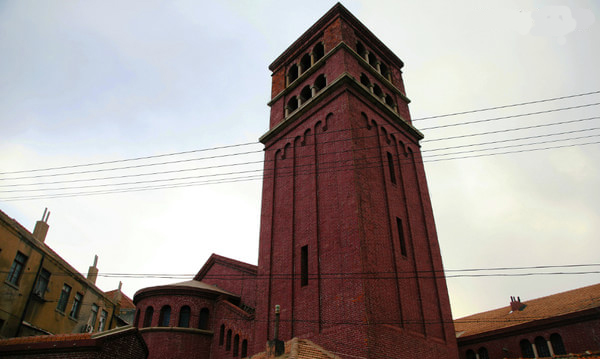 This is a Youth Hostel at Hengshan Road. The location is very secluded, surrounded by a small curved crossbar alley. This CYTS was transformed from an old house, and there are a cafe and beautiful courtyard. 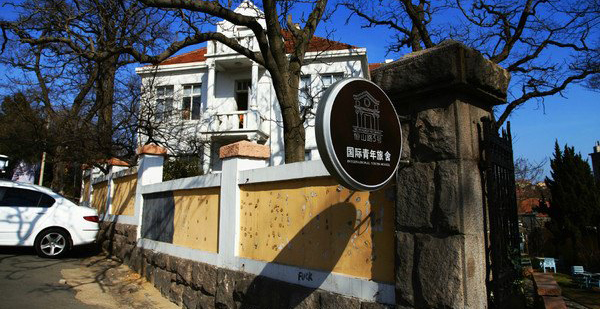 This kind of the building in the shape was formerly common in the old town of Qingdao, but now most of them are disappeared. It is said that it was used as gun turret in the past. 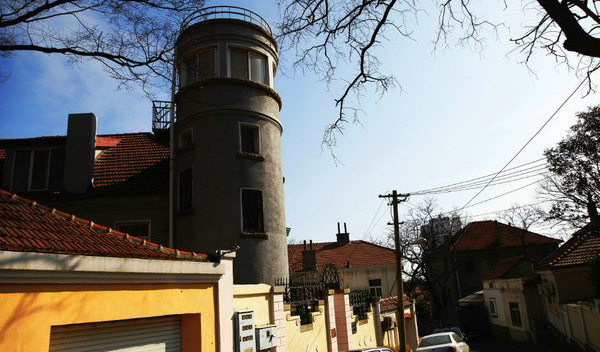 Qingdao Folk Museum in Chinese and Western architecture style is located on Da Xue Avenue. It was built in the 1930s, with red wall, large-scale.

Xiao Yu Hill is located in south of Qingdao City. It is near to Huiquan Bay to the south and Ba Guan Hill to the north. It has an elevation 60 meters and covers an area of 25,000 square meters. Buildings on the hill make full use of natural beauty. Main architecture on the top of hill is Guan Chao Pavilion, with three layers, eight octagonal and height of 18 meters.

Walk along No. 1 Bathing Beach, I reached the famous Trestle Bridge, which has a length 40 km. coastline in Qingdao is very tortuous, by views is comparable to that of Melbourne. Walking barefoot along the boardwalk in a leisure sunny day would be a romantic way to kill time. nearby is Badaguan (Eight Passes), where is used to be embassy district and there are a variety of architectural styles. It is called the International Architecture Exhibition. And visitors can see national flower of different countries, as well as many beautiful gardens. Spring should be the best time to visit there, when is the flowering time. 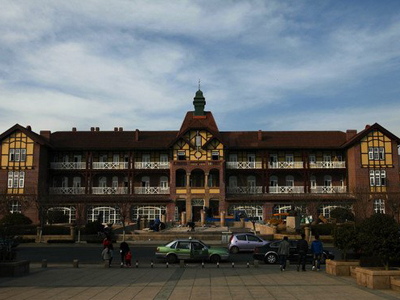 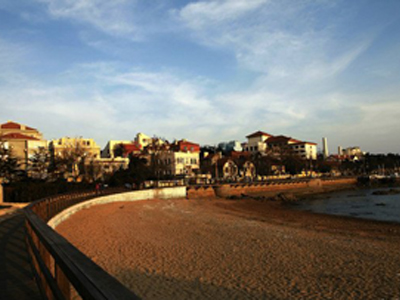 By the right side of this street is the famous Princess House. It is located on the 16th Juyongguan Road, just looks like what we often see in a fairy tale, delicate and lovely. Princess House was built in the 1930s, covering 1,000 square meters. It is said that it was built by the Danish Consul General in Qingdao at that time for Princess of Denmark to spend a holiday at a summer resort when she came to Qingdao. That’s how it got its name. But in fact Princess of Denmark did not come off. 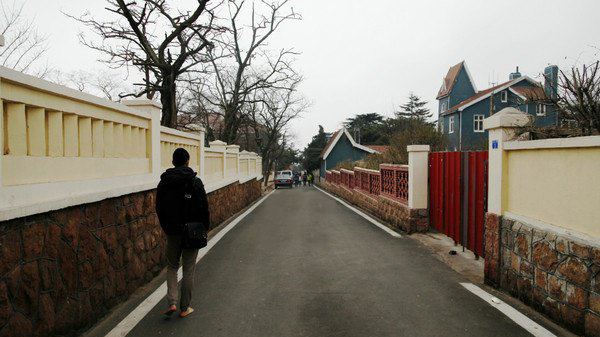 I also saw a castle-style building, the famous Flower Stone Floor. It is located in the back of Badaguan (Eight Passes), facing the Second Beach, with unique scenery and beautiful environment. Built in 1930, the external walls of it were used with granite stone masonry. Flower Stone Floor is a fusion of many Western European architectural styles, including Greek and Roman style, Gothic architecture.

Previous: A Worship Trip to Confucius Temple in Qufu

Next: Sightseeing in Turpan by Chartering a Van