Made from rice and Chinese yeast, Guilin Sanhua Liquor has a long history since the Guilin Sanhua Brewery was established in Song Dynasty. It was only served in the royal family at first. Nowadays, this old brand production is available throughout the area.

The wine adopted the name "Sanhua" (means three flowers) for the fact that it should be brewed three times before the final products. This liqueur is transparent and has a mellow and fragrant taste, but also a good kick! It may be an excuse to drink more Sanhua Alcohol that locals say the spirit improves blood circulation!

Guilin Sanhua Liquor has history, in ancient times, it was known as "sweet dew". In the Song dynasty Fanchengda came to Guilin to be minister praise highly of it "it shows the excellence of liquor" after drank it. And to make a good wine, first must have good spring water. 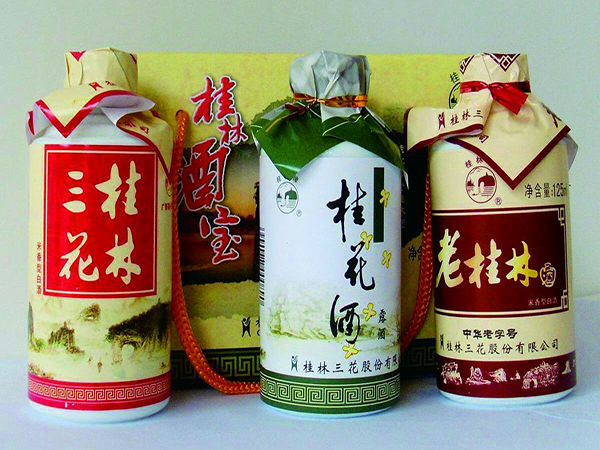 The Li River, especially the spring under the Elephant Trunk Hill which texture is pure, without sundry taste of trace minerals, provides a good material of Sanhua Liquor; second, the Li River basin’s grain is big millet, starch content as high as 72% that is the ideal material of Sanhua; Moreover, local made distiller’s yeast of suburb has rich smell. It is said to that after Sanhua Liquor is brewed, it should be loaded in the ceramic cylinder and preserved in stone mountain caves, after a year or two, let it become aging and aromatic, then packing to factory.

The brewing history of Sanhua can be traced back to the southern Song dynasty. Firstly it brewed by Shisi Public Kitchen, later it was passed to folk. From the late Qing dynasty to the republic of China, Sanhua workshops spread over in Guilin. After 1949, the country collected various outstanding winemakers in the folk to established Guilin Brewery Factory in 1952 (later renamed the Guilin Beverage Factory, in 1987 changed to Guilin Distillery), which continue to use traditional craft to make Sanhua Liquor. 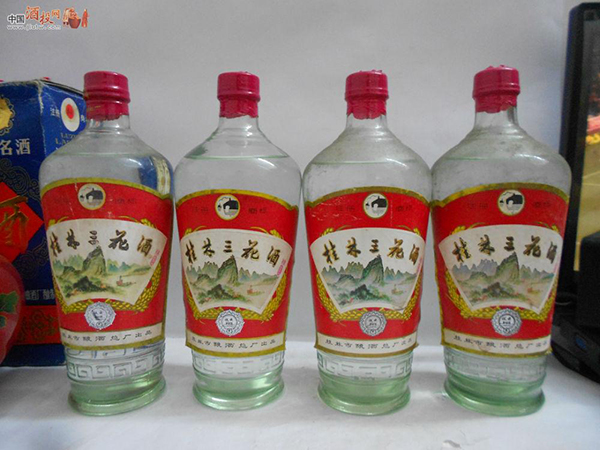 Sanhua Liquor is high quality, in addition to using clear, no impurities Li River water, the high quality rice, selected distiller’s yeast, but also because of weather of warm in winter and cool in summer in the caves of Guilin that forms special storage conditions, only by this making alcohol more fragrance.

Sanhua Liquor is limpid transparent, honey sweet, soft. Drinking moderate amount of alcohol, it can refresh oneself and is good for health.

Guilin Sanhua Liquor represents a culture of this city. It shows the hospitality of the locals. The pure and well-smell liquid is made from the water in Li River. Sanhua Alcohol is a 100% Guilin specialty only can be bought in this picturesque place. When having a cup of Sanhua Alcohol, you may immediately be a fan of this exotic drinking.