Sanxiaguo is one of famous dish of Hunan cuisine. Hanan cuisine (Xiang cuisine), which is one of China's eight most famous regional cuisines, has a long history. As early as in Han Dynasty, Xiang cuisine had already formed and the cooking techniques had reached a very high level. Hunan cuisine features peppery and sour taste. Due to its geographical location, the climate in Hunan province is mild and humid. Therefore, most people like to eat pepper for refreshing and staying healthy. The cuisine is deeply favored to become the unique customs of the local diet for using the sour pickles and pepper to cook. 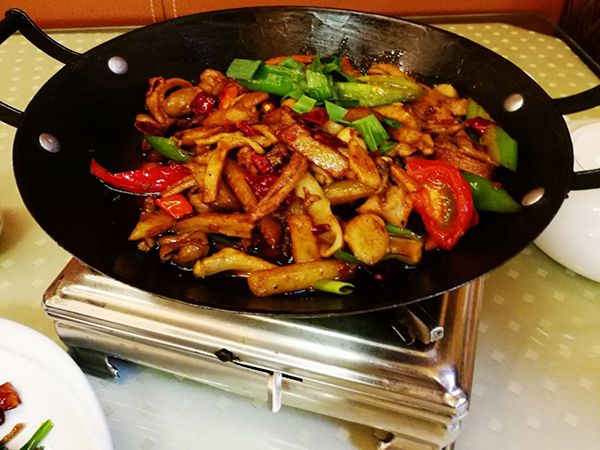 It is said that in Ming dynasty, the imperil court sent the army in Hunan to go to the frontline to fight against the enemy. It chanced that the Chinese New Year is around the corner. In order to keep up with the military plan, the general gave order to celebrate the New Year in advance. The soldiers cooked the bacon, tofu and radish together in a pot, which was called “He Cuisine” in that time. Later, this dish evolved into “Sanxiaguo” cuisine, mainly because it used three ingredients, bacon, tofu and radish to cook this dish. But nowadays, Sanxiaguo not only uses bacon, tofu and radish as its ingredients, but also adds fat intestine, tripe of pork, ox and sheep and other ingredient. 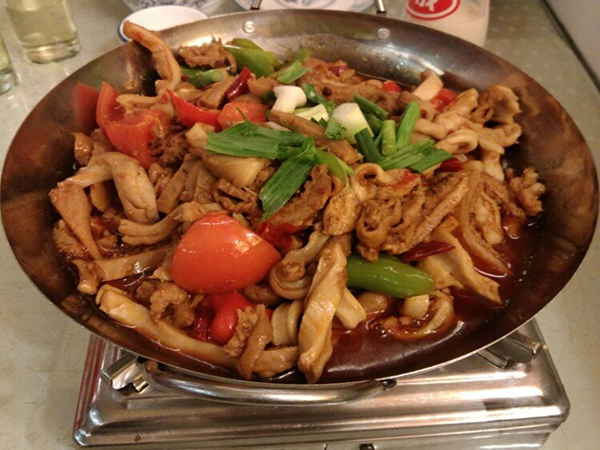 Sanxiaguo is divided into two kinds: the dry Sanxiaguo and soup Sanxiaguo. The dry Sanxiaguo has no soup and contains spicy flavor. You’d better not to taste it if you can eat spicy food. The food of this cuisine is soft and easy to digest. The usual cooking methods for these dishes are flying and braising. These cooking processes make the dishes more delicious and healthy for the diners.

Although this dish is delicious, it is generally unavailable inside the hotels in Zhangjiajie. You can only find it in some small local restaurants.