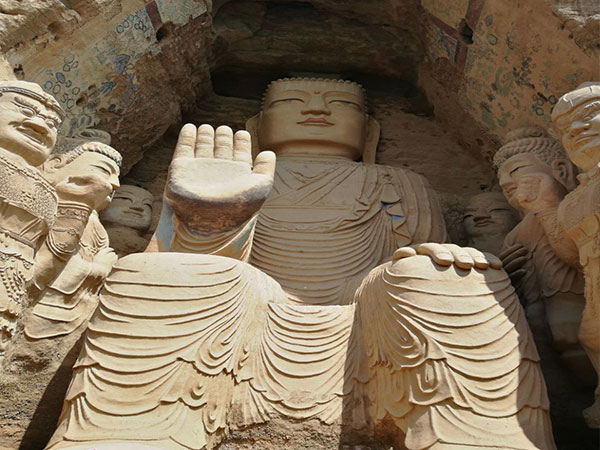 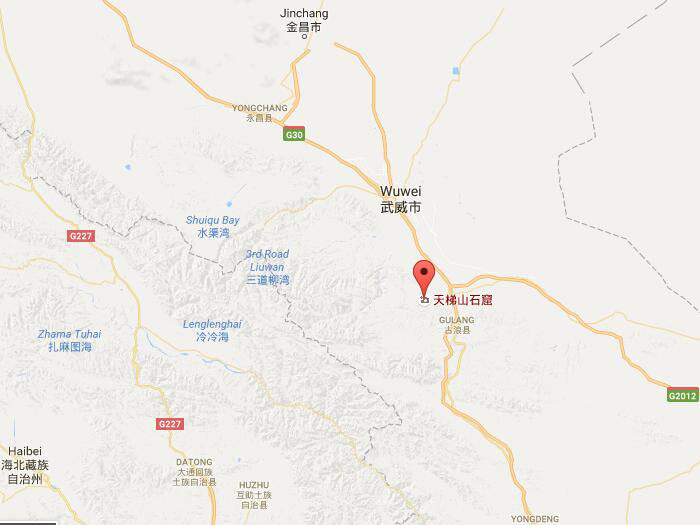 Tiantishan Grottoes(Chinese name：天梯山石窟), also known as Dafo Temple, is located at the Dengshan Village of Zhonglu Township, 50 kilometers south of Wuwei. It was built in the Northern Liang of the Eantern Jin Period, with a history of about 1,600 years. Tiantishan Mountain’s peaks are tall and rugged, steep and high, towering into the sky. There are stairs on the mountain. Up the stairs along the bumpy path, which like a hanging ladder on the mountain, hence the name of Tiantishan.

Tiantishan Grottoes was constructed based on the natural caves. It has a history of over 1580 years. In 412, Mengxun moved the capital to Guzang from Zhangye, and claimed Hexi King. He set government offices, repaired palace, and built gates here. Also called liangzhou monk Tan Yao and craftsmen to construct the Tiantishan Grottoes
In North Wei, Sui, Tang and Xixia Dynasties, the grottoes had been expended, and during Ming and Qing Dynasties, it became the monastery of Lamaism. According to the history record in Ming Dynasty, there were existing 26 grottoes. The grottoes were damaged in earthquakes. In 1927, the Liangzhou Earthquake damaged 10 grottoes.

Structure of the Tiantishan Grottoes

As one of the earliest grottoes in China, Tiantishan Grottoes was originally built in Beiliang Kingdom. Later, after the construction and expansion of the following dynasties, the grottoes’ scale is larger, and the architectures are magnificent.
In the grottoes, there are murals for hundreds of square meters. Now, there are 3 layers’ grottoes existed with 17 shine and over 100 Buddha’s statues, and the Buddhist texts of Wei, Sui and Tang Dynasties. The main grotto of Tathagata is a sitting statue with lively expression and exquisite mould.
The largest Grotto is 30 m high, 19 m wide and 6 m deep. And the Tathagata Statue is 15 m tall, 10 m wide with Manjusri, Samantabhadra, Virupakkha, Vaisravana, Mahakasyapa and Ananda at its right and left sides. On north and south walls of the grotto, there are large murals. The south wall was painted with Dragon with cloud pattern, the central is elephant and deer and the elephant’s back is packed with gleaming scriptures, and the lower wall is the Tigers, trees and flowers. On the north wall painted with the Ministry of Dragon, central painted white horse, ink tiger, Linden, and on horseback are sparking Buddhist texts, and the lower part was painted peony flowers. The entire mural is in clear brushwork and bright color.

Tiantishan Grottoes played a important role of the spreading of the art and thoughts of Buddhism in China. It also has an important statue on the history of China’s grottoes and the whole Buddhist.