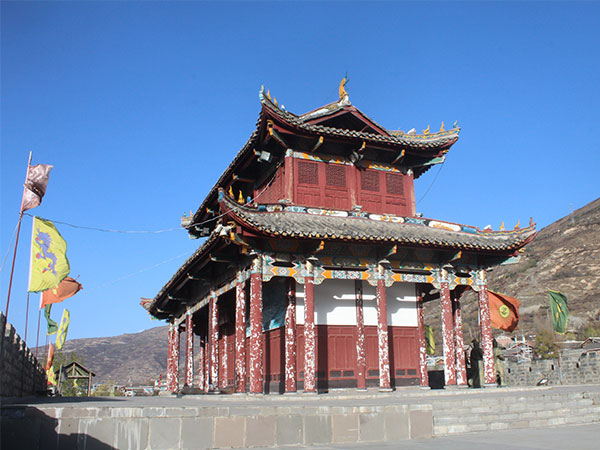 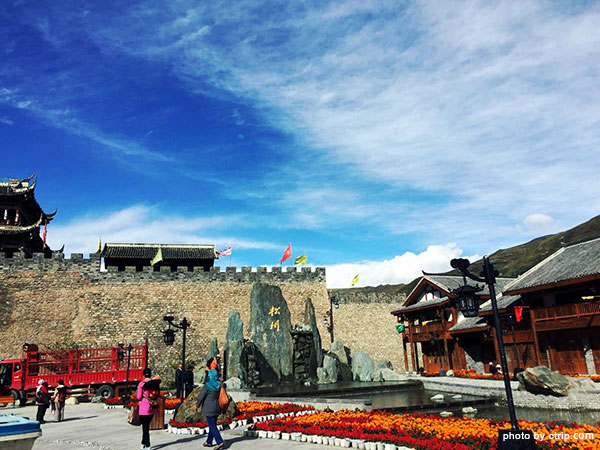 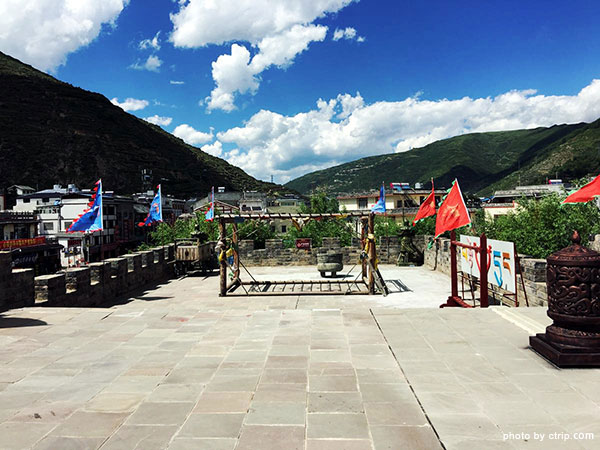 
Songpan Ancient Town is the closest big town to Huanglong National Park and the Jiu Huang Airport which services both Huanglong and Jiuzhai Valley National parks.

The ancient city of Songpan was built during Tang Dynsaty (618 – 907 A.D.) and it was later rebuilt during Ming Dynasty (1368 - 1644). Songpan was an important military post and economic and trading center for horse and tea exchange between Sichuan, Gansu, Qinghai and Tibet. In 1935, led by Mao Zedong and Zhou Enlai, the retreating Chinese Communist Army marched through the plateau of Songpan to advance to the north western province.

As well the history and scenery of Songpan, the cultural diversity is one of the most fascinating in China. because of its location, four ethnic groups are resident in Songpan including Tibetan, Qiang, Hui(Muslim) and Han (Mandarin). This contributes to the unique cultural style of this ancient town, Kangba Culture, a kind of multicultural medley of the four different cultural elements in this ancient historical town makes it a rare if not unique example of cultural history in China.

Walking along the bustling ancient streets in the town, some exquisite objects and ornaments can be found in the old stores, such as silver bracelets, silver rings, ethnic costumes and yak horn hair combs. Such cultural diversity gives rise to many unusual and tempting culinary delights.

While the ancient city of Songpan itself has plenty to keep you busy. The countryside surrounding the city offers a variety of tourist attractions. The Min Shan Mountain range surrounding the city provides such sights as Tibetan yak and goat herders leading their livestock over rolling grasses, endless valleys, and other beautiful landscapes. The best way to view this authentic side of minority mountain life is on of Songpan’s many horse trekking excursions.

► While largely a modern touristic recreation, tiny parts of the old city walls are still standing (the gates) and can be climbed.

【Guanyin Pavilion】, southwest of town on a hill. Offers a good view of the town and surrounding mountains. The shrine itself is currently closed.

【The West Gate】
Opposite the horse trekking company, follow the stream toward the dam and take the track on the left. About 45 minutes walk. From there, you can continue in many different directions. In particular, there are paths leading to the foot of two 4000 meters summits.

【Ancient City Wall】
Songpan Ancient City Wall was built in Ming dynasty, when the blue brick used at that time is 50 cm long, 12 cm thick, each brick is up to 30 kg, and the mortar was made by glutinous rice, lime and tung oil boiling together, therefore the walls are unusually strong. The wall, 10 meters high, 30 meters wide, 6200 meters long and is one of the best ruins of ancient city walls in China. The top of three gates located in the east, south and north shaped like half moon, and the cornerstones were carved the various ingenious embossments, which are antique and still retain the ancient feeling.
【The Ancient Battlefield Relics】
Since the ancient times, Songpan had always been a town of border area of great military importance. Today, the passes, soldier stationary reclamation, beacon tower and other ancient battlefield along the Minjiang river valley and Fujiang river valley still can be seen everywhere.
【Ancient Bridge】
Tongyuan Bridge is a semi-girder type covered wooden Bridge, during the rising tide period, swallowing large HongShuiChao rise time, leaf apricot blossom the ear, water bridge rotation, up and down bar with birds, constitute a picture of a peaceful and prosperous country.
【Temple Bell of Temple of Great Mercy】
It is said that the antique clock in the Temple of Great Mercy was made by a necromancer of immortal incarnation, when the necromancer finished and left, he told the temple monk: “after ten days I leave in the future you can ring the bell.” The temple monk didn’t understand his meaning, and on the day he left the monk rang the bell in the afternoon. At this moment, the necromancer only arrived to the snow mountain ridge, and he heard the bell and sighed "the bell can only be reached here!" It is said that if this is not the case, the bells of Temple of Great Mercy will be reached as far as the capital.
【Chuanzhu Temple】
Chuanzhu Temple is located in the northern suburbs of Songpan County, 17 km away, which is the first town of northwest Sichuan plateau, is also a connection of Jiuzhaigou, Huanglong, Hongyuan, Zoige and other scenic areas. It is 337 km from Chengdu south, is 88 km north from Jiuzhaigou, 39 kilometers east of Huanglong, 43 kilometers west from prairie, is the must-see along the "Huanglong - Jiuzhaigou" golden tourism hotline. 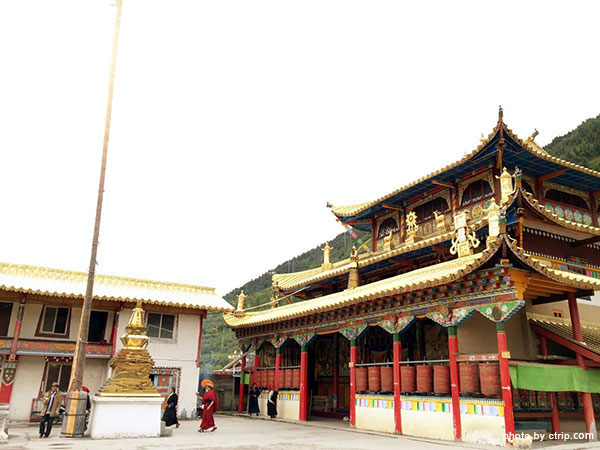 【The Red Army Long March Memorial Monument Park】
Memorial Park is located in the Yuanbao Mountain, the east of Chuangzhu Town, starting in April 1988, finished on August 25, 1990, and the name of park was inscribed by Deng Xiaoping. The red army long march was a great feat in the history of mankind, the political bureau of the CPC central committee held several important meetings during the long march for 5 times, two of them were held within the territory of Songpan County, namely Shawo meeting and Mao’ergai meeting. Therefore, the red army long march memorial park was built here.
【The Prairie】

Going towards west out of Chuanzhu Temple to Gainitai, namely you are into the prairie. Here the vast pasture, paddock, and animal husbandry are very developed, forming a unique Sichuan northwest prairie nomad. Here belong to Amdo (Tibetan pastoral areas) Tibetan areas, in this magical land, covered with large and small solemn and mysterious temples, with many kind Buddhism true believers, full of strong atmosphere of Tibetan buddhist culture.

The highway mileage of Songpan County reached 726 kilometers, of which: national highway 141 kilometers, provincial highway 44 km, county road 281 kilometers, the village road 260 kilometers; and there are 100 villages can be accessed by roads now. The county with an elevation of 2849.5 meters, 335 km from provincial capital Chengdu, 431 km away from prefecture capital Barkam, and 17 kilometers away from the Jiuzhai Huanglong Airport. Aba Bus Transport Company in the Songpan County has buses sent to Huanglong every morning. The bus to Huanglong departs early and arrive late, one-way ticket price 20 yuan/person. In Chuanzhu Temple town, there are also individual vans for rent, about 250 to 400 yuan/day. During the tourist season, in Chuanzhu Temple town, there are many vans to the Huanglong Scenic Area.
The large railway station nearby Songpan County is Chengdu Railway Station. Chengdu Railway Station is located in intersection of Baoji-Chengdu, Chengdu-Chongqing, Chengdu-Kunming, and Dazhou-Chengdu Railway, and the junction of Jinniu District and Chenghua District, which is the only passenger special grade station of Chengdu railway administration. It takes on the passenger transportation of Baoji-Chengdu, Chengdu-Chongqing, Chengdu-Kunming, and Dazhou-Chengdu Railway.

In Songpan County, there are two passenger bus stations, one is the Songpan County Bus Station, and another is Aba Prefecture Transport Company, there are buses to Chengdu, Jiuzhaigou and Huanglong. The departure time is basically from 6:00 to 7:00, so tourists who want to take the bus can't be sleep late. In front of the Songzhou Hotel, there is a small bus station only going to Chengdu (passing Dujiangyan and Wenchuan), departs at 6:00 in the morning. When in the tourist season, the number of bus between Chengdu to Jiuzhaigou will be also increased, so in terms of traffic may rest assured.

【By bus】
There's a bus station at the North end of town, a few blocks north of the North gate of the wall. The bus station serves major locations in Sichuan, as well as locations in Qinghai, and can also connect to Xiahe in Gansu, via Tongren and Hezuo. There are also buses to/from Jiuzhaigou Nature Reserve and Huanglong National Park. The place can take on a very touristic flair in the summer months overrun with bus loads of foreign and Chinese tourists arriving eager to spend their money on fake nicknacks and souveniers, give or take the odd cheesball picture. 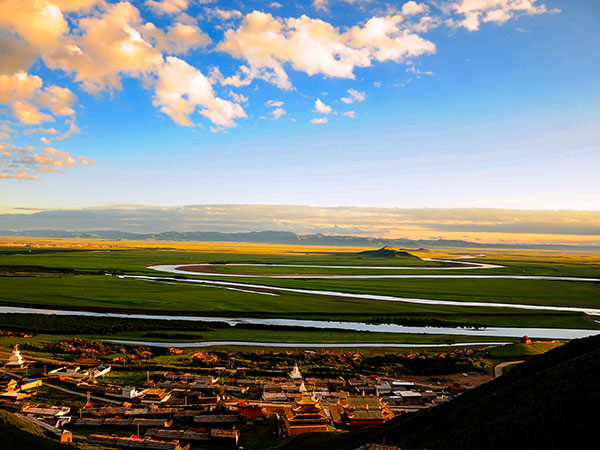