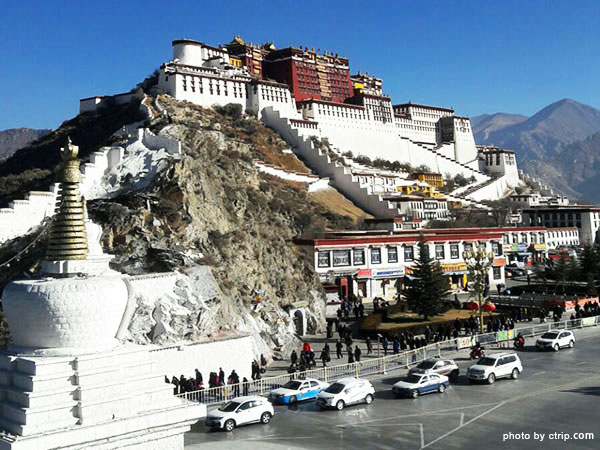 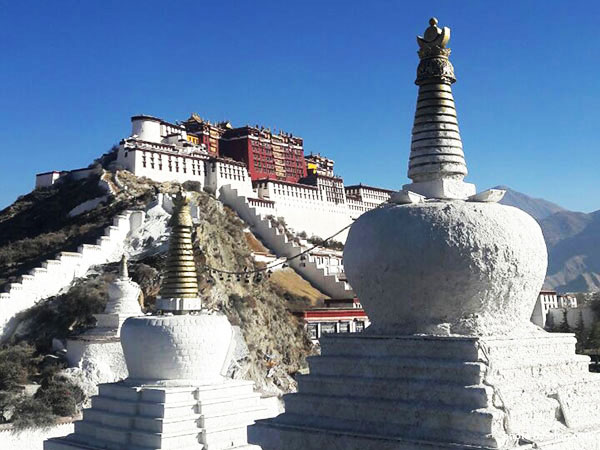 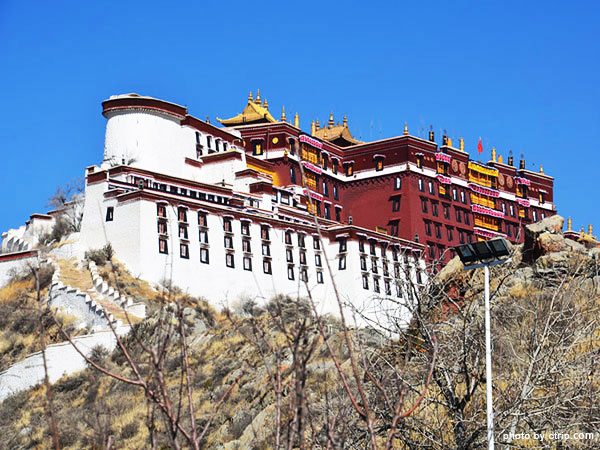 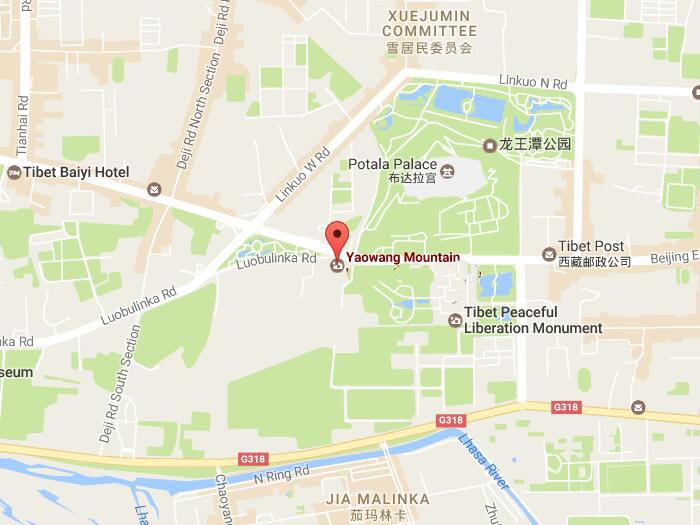 At the right side of Potala Palace, Lhasa, Tibet Autonomous Region, China

A sacred hill in the city of Lhasa in Tibet; One of the best place to shoot the Potala Palace


Chakpori Hill (Yao Wang Shan) is a sacred hill located at the right side of Potala Palace, with an altitude of 3725 m. In Tibetan language, Chakpori means “the horn of mountain”, which refers to the “horn” of the Red Mountain.

What to see on Chakpori Hill

Chakpori Hill’s attractions include white pagodas, Zalalupu Grotto Temple, stone inscriptions, Daodengdawa, Kangyur Pogoda and so on.
Mainly Attractions will be:
►White Pagoda
Chakpori Hill and the Potala Palace were both parts of the Red Mountain, connecting with a high white pagoda, whose gate used to be the entrance of Lhasa City. In 1960s, considering the development of Lhasa, the while pagoda was demolished and was substituted by a traffic artery, and the two hills was separated. However, in Tibet, it is a sacred mountain, and the religion believers do not want the Potala Palace and Chakpori Hill separated, and the two hills now is connected with prayer flags. In every believers’ mind, the white pagoda, it is not just a pagoda, but also the a huge space coordinates for believers to accurately identify the places they worship.

►Zalalupu Grotto Temple:
At the east side of the hill, there is a grotto type little temple - Zalalupu Grotto Temple, with a history of over 1000 years, It was well preserved. The grotto is an irregular rectangle with an area of about 27 square meters. At the entrance of the grotto, there is a center pole. Between the pole and the grotto wall, it is the narrow prayer corridor. There are 69 stone statues. On the wall, there are the statues of Songtsen Gampo, Princess Wencheng, Princess Bhrikuti and Great Officers. It is dark in the grotto, only lighting butter lamps. If you want to enter the grotto, do not forget to bring head lamp.
►Thousand-buddha Cliff
There is a thousand-buddha cliff. On the huge cliff, there are thousands of figures of Buddhas. And there are many families cave Mani Stones. The cliff inscriptions have existed for a very long time, which can be dating back to the period of Songtsen Gampo. Now, the inscriptions on the cliff are about thousand meters long. The cliff is full of colorful inscriptions, very magnificent.
Mani stone carvings and statues’craftsmen through their hands deliver the tenacious sprit inside the stones to each pilgrim. Chakpori stone artisans make a living on carving Mani Stone. Some times their whole family is come here to caving stone, or get married here. They work before down since ancient times, day by day. In their mind, their work is also a accumulation process of merits and virtues.

1. It is recommended to wear sneaker to climb the mountain
2. As Lhasa’s altitude is high, you should avoid a lot of excessive exercise, pay attention to the prevention to the altitude sickness.
3. It is the best spot to take photos of Potala Palace. In morning, there will be lots of people waiting of taking photos of the Potala Palace’s sunrise.
4. The best time to visit Chakpori Hill from March to October, for avoiding the rain season and cold winter. The temperature in the morning and evening is quite cold even in summer.