Laying back on the comfort of the sofa bed, indulging in one of the aqua luna's hip cocktails and soaking in the fantastic views and skyline of Victoria Harbor of Hong Kong is a must do thing while you are traveling in this city.

"Aqua Luna" is a tourist sailing boat for visitors to discover a side of Hong Kong that few people get to see. Aqua luna is known as Cheung Po Tsai in Cantonese. The sailing boat is named after a famous pirate of the last century the in Hong Kong, who used to terrorize these waters. The shipping company calls the tourist sailing boat as "Aqua Luna" in order to strengthen traditional image of Hong Kong. The greatest symbol of "Aqua Luna" sailing boat is handcrafted traditional Chinese junk to be built in Hong Kong using age-old designs and traditional materials by an 80 years old local craftsman. Every nail and every wooden on the boat was made by hand with the ancient Chinese shipbuilding techniques. Many details are produced according to the original appearance of the pirate ship that belonged to Cheung Po Tsai. The Sailboat is set up with two layers. The upper layer has open lounge, available for broad sofas on the both sides of the boat. Visitors can enjoy sea breeze while enjoying a drink. The lower layer is a dining area with air conditioning on. And here puts round tables and chairs with a strong Chinese color, as well as a horseshoe-shaped bar. But the charter is generally available for tourists who charter the boat. The service here is good. The boat sails circle around the harbor. It takes about 45 minutes or so for the whole voyage. Every passenger can have a cup of free optional drink. 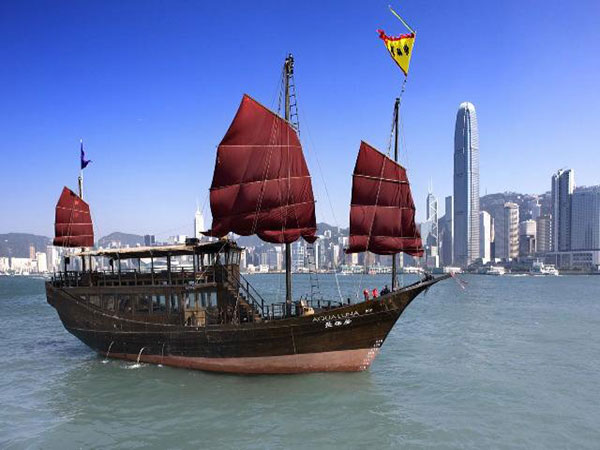 "Aqua Luna" provide harbor cruise service for eight times daily. And it sails from 1:30 pm to 11:00 pm. Passengers can board "Aqua Luna" respectively at Tsim Sha Tsui No.4 Pier or at Queen's Pier.

Cheung Po Tsai, also known as Zhang Bao, was born in Jiangmen. He was a fisherman when he was young. And later he was abducted and brought up by the pirate Zheng Linhai. When he grew up, he was trained good martial arts by Zheng Linhai. After Zheng Linhai’s death, Cheung Po Tsai made a captain. In the early time of his rule, he dominated the Pearl River Delta. 18 Portuguese Navy military ships were bombed and sunk by him. Because Cheung Po Tsai always did things right and he was tactics, so he was admired by people around him. Therefore, His team expanded rapidly. He owned more than 800 big ships and more than 1,000 boats during the peak period. He took Hong Kong as his big base and often associated with overseas exchanges, making desolate Hong Kong Island thrived for a time.