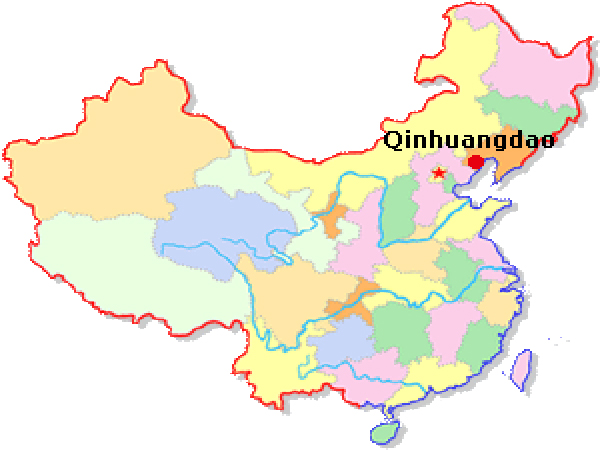 Although it has the only ice-free harbour in Hebei, Qinhuangdao was just a minor fishing village until the end of the 19th century; now Qinhuangdao is the main harbour city of Hebei province. Located in the centre of the economic region skirting the Bohai Sea, it is also a growing industrial city, with facilities for Industrial Glass, Bridge component, Aluminium processing, Gas turbine and Automotive wheel manufacturing and it is a distinguished dry and red wine production region.

However, most people know Qinhuangdao as a fascinating summer resort; famous for its history, its beautiful coastline and unique attractions relevant to the Great Wall. Qinhuangdao is a time-honoured city named after the first emperor in Chinese History, Qin Shi Huang, who made his east inspection tour to this coast and sent people to the sea looking for the immortals.  He didn’t find them, but was obviously impressed with the natural beauty of the area, giving it his name.

It was Qin Shi Huang who is credited with building the Great Wall of China, and could it be just coincidence that the Eastern end of the wall is to be found here?

Qinhuangdao has three main developed areas:
Beidaihe: A first-class summer seaside resort for senior government officials. Many political decisions affecting China are made here, making it equivalent to Maine or Camp David in Maryland in the USA, or the Black Sea resorts in the old USSR. Beidaihe is reputedly one of the four finest bird watching resorts in the world.

Shanhaiguan: a popular tourist destination, featuring the eastern end of the Great Wall.

There are well developed service facilities, good urban infrastructure and convenient traffic that greatly promote the further development of the city.

Population: The total populations of 2.83 million by the end year of 2007.there are 43 minority nationalities such as Mancu Chaoxian Huizu Mongol and so on.