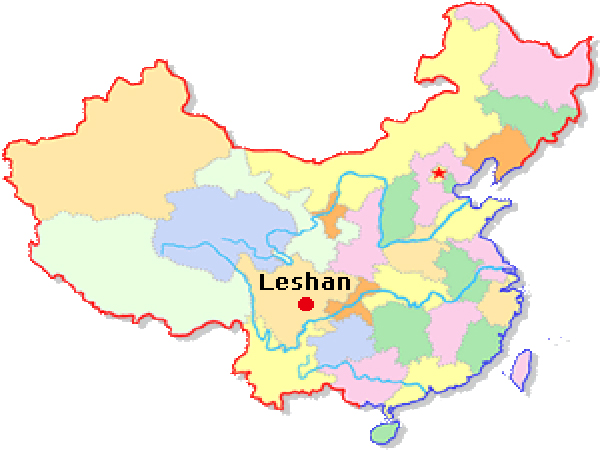 Leshan City, original called Jiazhou, belonged to Shu Country in the history. It is the national historic and cultural site. Leshan is situated in the southwest of Sichuan Province, about 110km from Chengdu(the Capital city of Sichuan  Province and Fourth largest city in China) and 20km from Emeishan at the confluence of the Minjiang, the Qingyi  and  the Dadu rivers. And Leshan City possesses two world heritage sites (Leshan Giant Buddha and Mr. Emei) in the world.

Leshan is one of the most rapid development cities in civilization field. From the hundreds of unearthed articles, people can trace the cultural development footprints in Leshan City.

► Area: It has an area of 20 thousand square kilometers.

► Population: Leshan City has 33 national minorities such as Li Nationality, Hui Nationality and Miao Nationality, etc, which have a population of more than 113,000, accounting for 3.2 % of the whole city. Of them the Li Nationality has the largest population, which mainly live  in the two Li Autonomous Counties of Mabian and E'bian and Jinkouhe District of the city. Those inhabiting in Leshan City enjoy the same special treatment that their cousins in the autonomous regions have.

► Geography: Geographically, the lay of the land around the city rises and falls, having good natural surroundings and scenic beauty.

Because of its advantageous location in the southwest of the Sichuan Basin, the climate in Leshan City is fairly good and the two mountains Wuyou Mountain and Lingyun Mountain around Leshan City are luxuriantly green. As well as a mountainous area, aspects of the terrain take the form of a plain and an area of hills. The southwest mountain area of the Sichuan Basin has three dimensions to its climate featuring a mild winter and a relatively cool summer, with rain in both early spring and the fall. This means that the mountain area of Leshan is highly suitable for the propagation of vegetation.

► Climate: The land surface of Leshan descends from southwest to northeast. The western part is mountains. It has a subtropical monsoon climate with an annual average temperature of 17.4C, and has 333 frost-free days. Annual rainfall averages 1,389 millimeters.

► Historic monuments
In 1996, the Mount Emei Scenic Area, including the Leshan Giant Buddha, the largest stone-carved buddha in the world, was declared a World Heritage Site by UNESCO. Mount Emei is located within the county-level city of Emeishan, which is under the administrative jurisdiction of Leshan. The ancestral home of Chinese writer, academic and politician Guo Moruo is preserved in the Shawan District of Leshan.