With the goal to catch the tail of Summer, Top China Travel started an exploration tour to Guangxi Sanjinag Dong ethnic county. From August 26 to 27, we had a two-day Sanjing ethnic tour by exploring the famous Chengyang Wind and Rain Bridge, visiting the traditional Dong ethnic village, and enjoying the unique Hundred Families Banquet.
Started from Guilin, we spent about 3 hours driving from Guilin City to Sanjiang County Sanjiang is a county famous for its Dong minority people. From the unique Drum Tower to the ancient bridges, from the oil tea to the hundred families banquet, all things here are influenced by the ethnic culture deeply.
♦ What to see 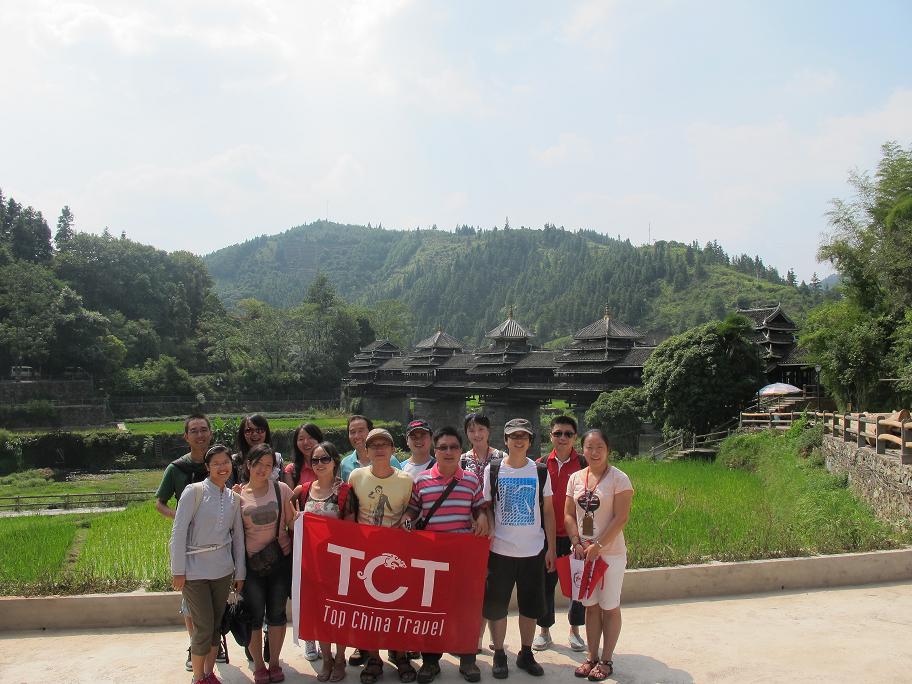 ► Chengyang Wind & Rain Bridge – located at Lingxi Village, 18km apart from the north of Guy Town of Sanjiang County (about 40 min driving), is the major cultural relic under state protection. This bridge is the symbol of Dong ethnic architecture. In Sanjiang, there is a sentence said that there is a bridge, there are villages. Bridges in Sangjiang are a kind of cultural representative. 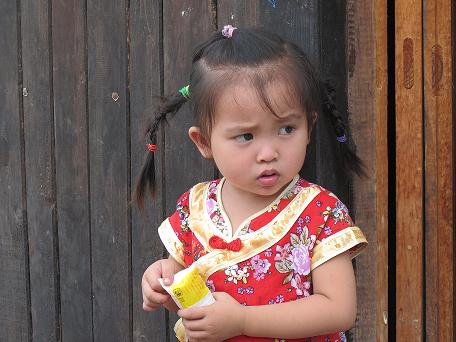 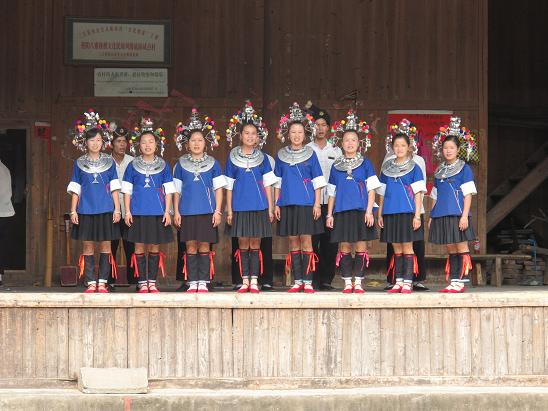 ► Ma’an Village – go across the bridge, we arrived in a traditional Dong minority village called Ma’an. Just like most villages in Sanjiang, the symbol architecture of this village is a drum tower. In this village, people can enjoy the traditional Dong ethnic performance (about 30 min), Dong minority songs and dances are particular. Dances of Dong people are elegant and grace in slight movements. There are some kinds such as Yeah group dance, Tang dance, Lusheng dance, etc.
♦ What to eat 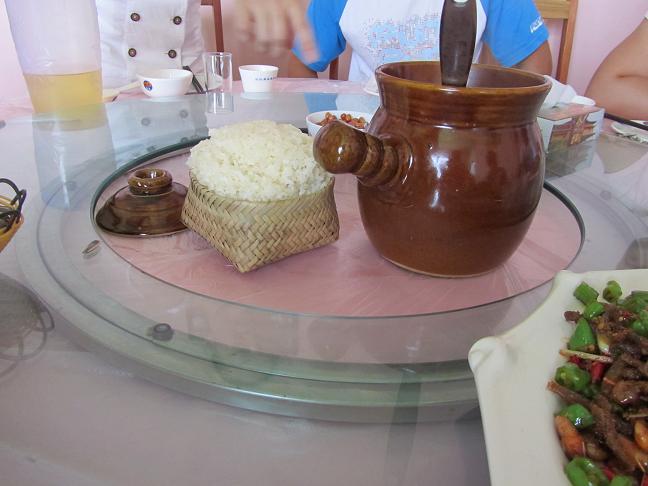 ► Oil Tea – a very traditional food of Guangxi minority people. From the name, it can be known that this food is made of oil and tea. Mixed with fried rice, polished glutinous rice and other ingratiates, the oil tea can be a best choice to know more about Dong people’s eating culture. 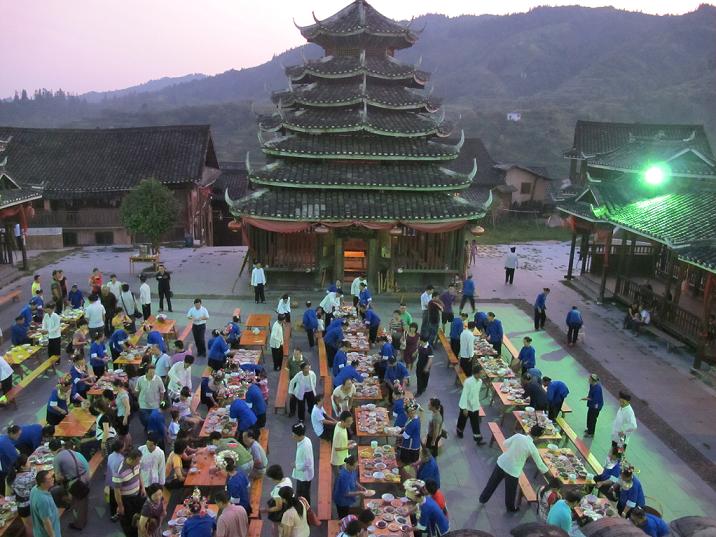 ► Hundred Families Banquet (about two hours, start around 19:00) – it is a meal eating on a outdoor square. Hundred families banquet is a kind of banquet prepared by one hundred Dong’s families, each family cook some dishes and then, put their dishes on tables which are set on the outdoor square to entertain diners. Before the meal, Lusheng dance will be shown for you. While after the meal, diners will experience a toasting process. If you are a man, Dong ethnic ladies will propose you a toast by singing a toasting song. If you are a woman, Dong ethnic men will toast you. Although they could not understand what we said, they show their hospitality by sing songs loudly.
♦ What to do 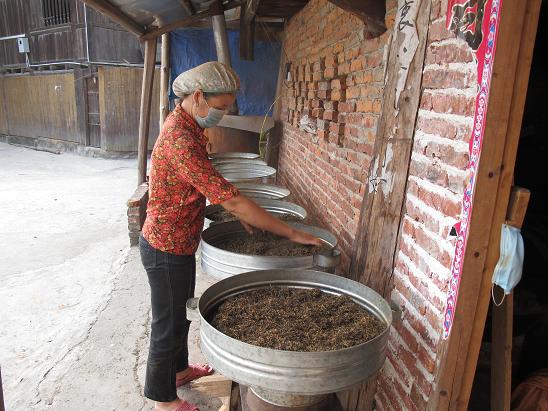 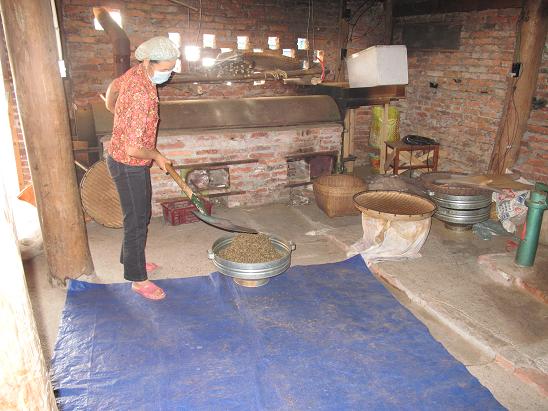 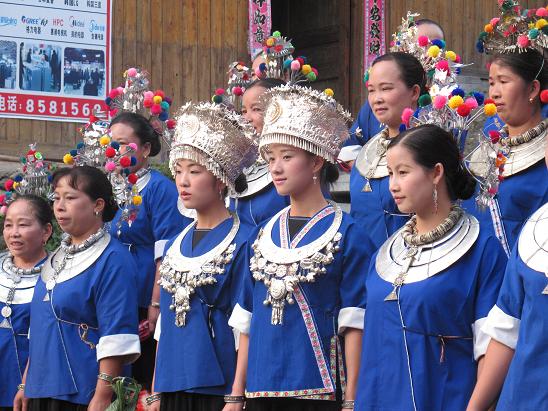 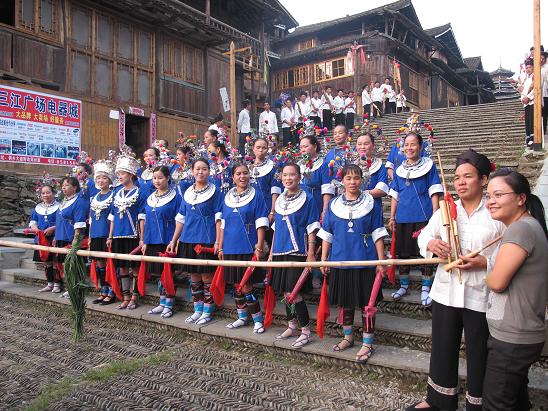 ► Sing songs with Dong’s women – before we enter into the village to enjoy the Hundred Families Banquet, we should sing songs with Dong’s women. In Chinese, it is called “Dui Ge” which means both sides sing songs alternately.
From the above information, our Sanjiang ethnic tour can be summarized as the following itinerary:
♦ Start from Guilin to Sanjiang with a 3-hour driving.
♦ After check-in, we spent our Lunch time in the local restaurant. Oil tea was the highlight of this meal.
♦ After the lunch, we drove to the famous Chengyang Wind & Rain Bridge, this symbol of Dong ethnic culture was a must-see attraction. This wooden structure is still standing firmly since it was built in 1912.
♦ The next spot was Ma’an Village. Dong’s song and dance performance could be enjoyed here.
♦ Continue our trip by driving 20min to a tea workshop in Linxi town. In this workshop, we had a chance to see the tea making process.
♦ And then, the large-scale hundred families banquet was waiting for us. Dong’s people shown their hospitality by singing songs, performing dances, cooking hundreds of dishes and toasting us honestly. (about 2.5 - .3 hours)
♦ Finished this banquet, it was the time to have a rest in the hotel. We drove back to the Sanjiang County and said goodbye to Dong’s ethnic village happily. 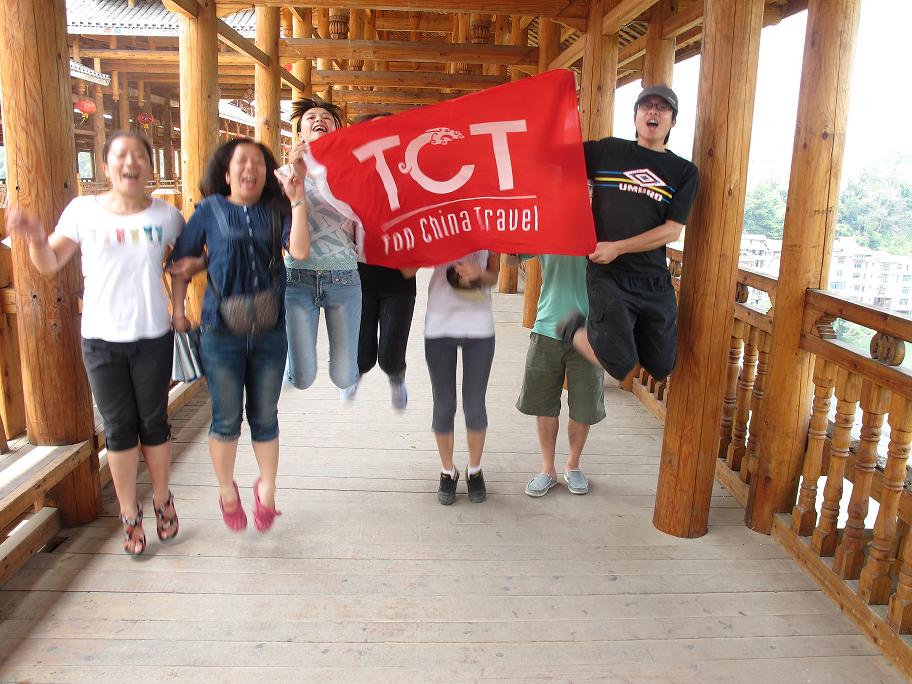 Previous: A hiking trip to the Great Wall