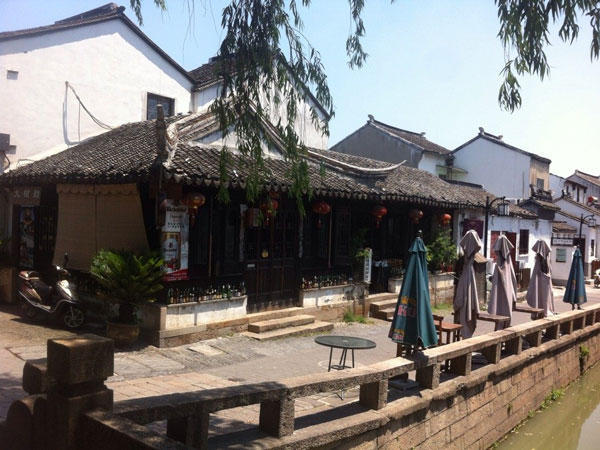 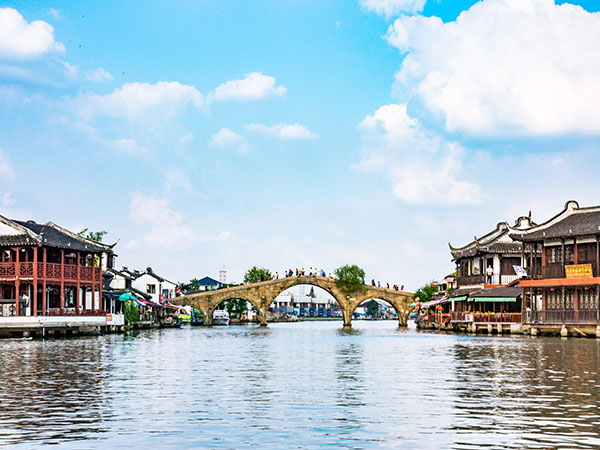 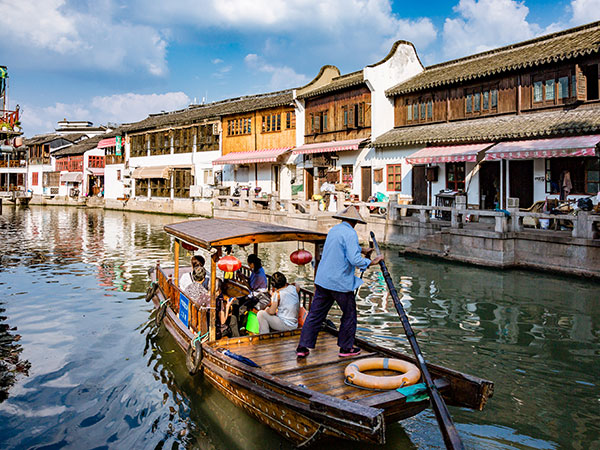 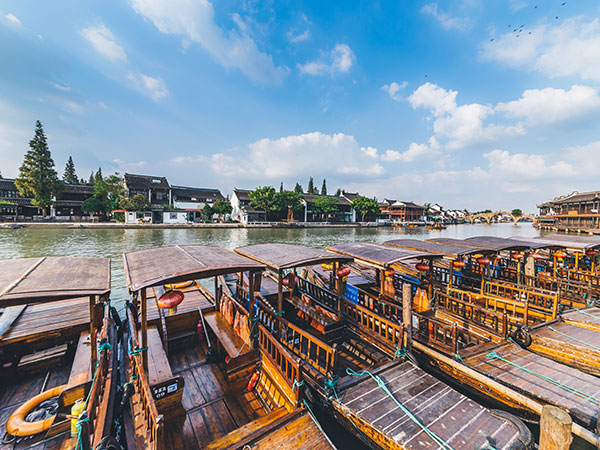 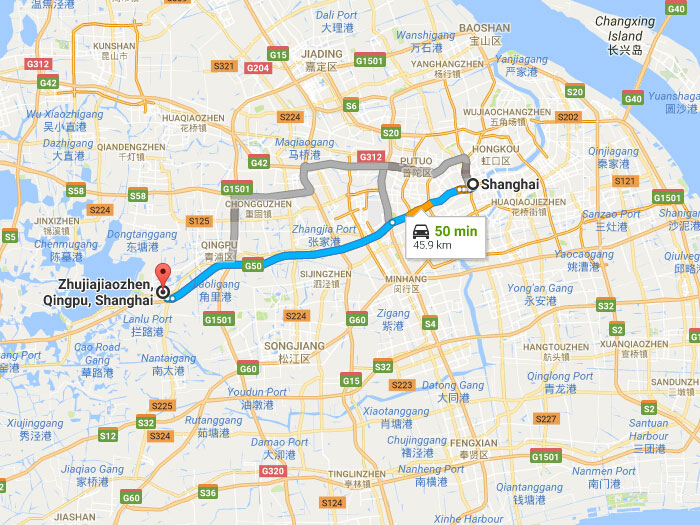 
Located in a suburb of Shanghai city, Zhujiajiao is the nearest ancient water town around Shanghai, with a history of more than 1,700 years. Endowed with another elegant name - 'Pearl Stream' - the small town is the best-preserved among the four ancient towns in Shanghai. Unique old bridges across bubbling streams, small rivers shaded by willow trees, and houses with courtyards attached all transport people who have been living amidst the bustle and hustle of the modern big city to a brand-new world full of antiquity, leisure and tranquility.

The architectures which can be dated back about 5,000 years are still standing here quietly. 36 stone bridges and numerous rivers line Zhujiajiao, and thousands of ancient buildings still line the riverbanks today. Many centuries-old stone buildings are home to residents today, as they were for many dynasties in the past.

Zhujiajiao, where market had already formed during the Song and Yuan Dynasty, was officially set up as a town during Emperor Wanli`s reign of the Ming Dynasty, Another name for Zhujiajio is Pearl Streets Pavilion and has also been given a nice name, the Peal Stream, The town occupies an area of 47 sq.km. It is crisscrossed by rivers and canals, with 9 long streets running along the rivers and thousand of buildings of Ming and Qing Dynasty architecture flanking both sides. There are 36 ancient stone bridges, among these there's a first 5 stone-arched bridge in shanghai called "Fangsheng Bridge" or "Setting-free Bridge".

Must See Highlights in Zhujiajiao

Zhujiajiao is a kind of large town. The main charm of the town is strolling its streets. There are however quite a few specific sights. There are a lot of things for you to see and feel. But do you know what are the highlights to visit in the town? The following sites are must see attractions in Zhujiajiao.

About a kilometer long, Bei Dajie (North Street) is the main thoroughfare in old Zhujiajiao. Along the street lines with many old buildings, many of which has a history of hundred years. It feels leisure for a nice stroll.

Integrated with the classical masters of craftsmen from all districts of Shanghai, Zhujiajiao is also the flagshop of all artistic shops on the North Street.

Built in 1912, the owner (Ma Wenqing) spent 300,000 taels of silver (equivalent to 12000 kg of silver) and 15 years in building the garden. The architecture in the garden is a combination of the Chinese traditional and the Western styles, rarely found in the country. It consists of three parts - the main hall, the garden and an artificial hill area. The most iconic landmark of the garden is a five story building with a pavilion on its roof, which is the tallest building in old Zhujiajiao.

Originally built in 1341, it is a Buddhist monastery with three main buildings and separate living quarters.

It is a Daoist temple dedicated to Guanyin, the goddess of mercy. Authentic worship still goes on, but like most temples in tourist destinations, it's pretty exploited for tourism.

It said to be the best preserved Qing post office in China, and among its exhibits you'll find antique post cards of old Shanghai and letters written on bamboo.

Be of the same root with Tong Hanchun Tang in Shanghai, it is found in third year of Guangxu’ reign in Qing Dynasty. This dispensary with a history of nearly one hundred years has contributed a lot to society.

Bridges are something of highlight attractions of Zhujiajiao. There are more than 36 stone bridges, most of which are quite old, dating back as early as the Ming dynasty. What’s more, most are only a few meters long and broad enough for a pushcart. The most iconic bridge is the 70-meter long Fangsheng Bridge. There are 5 symmetric arches, and the height of the bridge peaks is at 5.8 meters. It was originally built by the monk Xingchao of Cimen Temple in 1571, and then rebuilt in 1812. The central arch is decorated with a stone relief of eight dragons surrounding a pearl, and the pillars at the ends are sculpted into lions. It's the largest stone arch bridge in Zhujiajiao and populated by merchants who want to sell you everything from live fish to batteries for your camera. And have some small change ready for the beggars.

【Taking a Boat Ride】
There is always a water way in water town in China, which make boat ride a leisure way to enjoy the beautiful landscape of the town.

There are two kinds of boat rides are available in Zhujiajiao: lake cruise and paddle boat.

Paddle boats are commonly seen and are a nice way to get a good view of the town from the water. Each paddle boat can take 6 people in total, and they are available for two kinds of trips - short distance and long distance with different price. And it will charge for the whole boat, which mean if there are not enough 6 people in your group, but you still want to take the paddle boat, you nee to pay for the rest of empty seats as well. The short distance will only take you up and down the main canal, while the long distance basically takes you all over town and back.

If you would like to take a trip out on the lake, larger boats, like lake cruise, are available at No. 60 Dongjing Street. The tickets for these trips are charged per person. The cruise will last either 30 minutes or and hour, depending on which boat you choose.

How to Get to Zhujiajiao Water Town

You can take Metro Line 17 to there, get on at Hongqiao Railway Station and get off at Zhujiajiao Station. The most affordable way to get to Zhujiajiao is to take a bus from the bus station at the Pu’an Road bus station near People's Square in Shanghai. Make sure you take the bus line called Hùzhū Gāosù Kuàixiàn (Chinese: 沪朱高速快线). This should take around 1 hour for one-day journey. There are other bus lines, but they can sometimes take up to 2 hours. Don't worry about where to get off, Zhujiajiao is the end terminal. If you have a loose budget for the trip, you can get both to and from Zhujiajiao by taxi or rent a car with driver via travel agency.

TopChinaTravel can offer car rental service for you. If you need, please contact us by sales@topchinatravel.com It is recommendd to spend more than 3 hours. 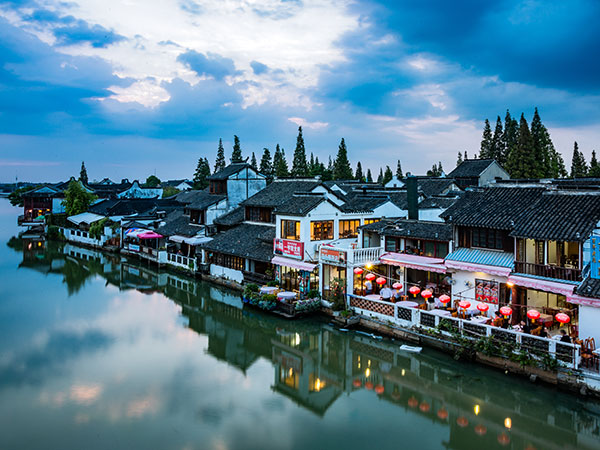